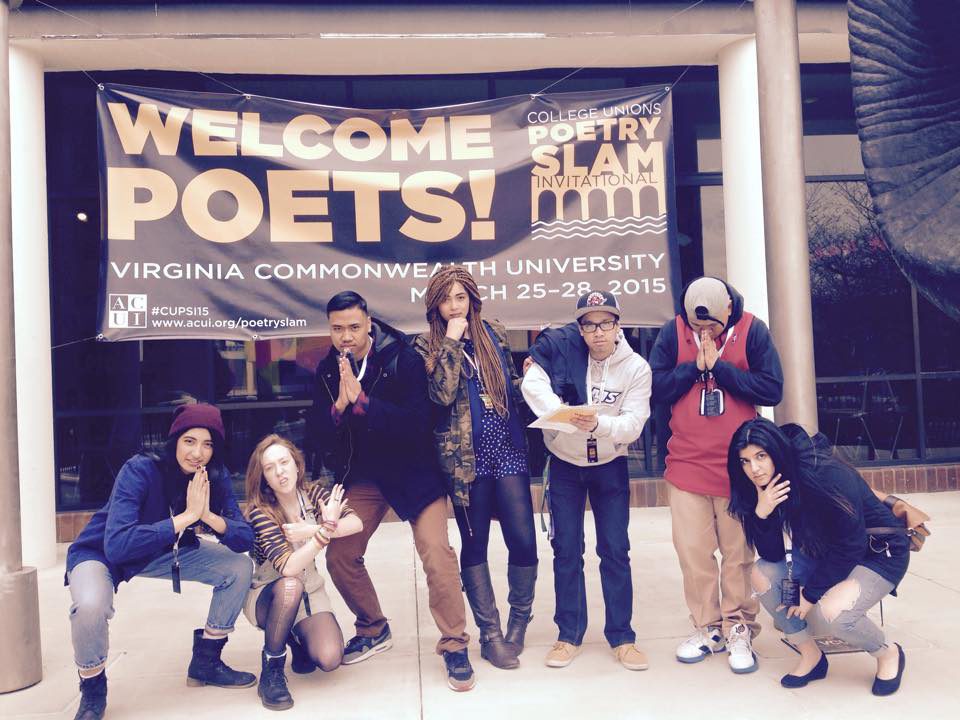 Despite the loss, the Ryerson poets are proud of being the only Canadian team to compete. (Courtesy of Brian Millado)

Approximately $600 in out-of-pocket expenses and one donation of $3,500 from Ryerson later, a group of seven slam poets from the university made it as the first Canadians to participate in United States’s largest college slam tournament.

Sixty-seven other colleges and universities from across the U.S. also competed during a four-day event on the weekend. Ryerson was the only international team in attendance.

Brian Magee, educational program co-ordinator for the College Union Poetry Slam Invitational, said he’s always wanted the event to welcome international teams since its debut in 2001, but that this was the first year that it became a reality.

“We were really excited this year when members from Ryerson reached out to the event to inquire about the opportunity,” he said.

Fourth-year Ryerson English student, Brian Millado, was the one to reach out to Magee. Millado has been doing spoken word since the tenth grade, and is now the coach of the seven-man team that went to Virginia Commonwealth University to attend the tournament.

Millado’s team consisted of himself, five other competing poets, and one assistant coach — all of whom are students at Ryerson.

During the competition, team members competed in “bouts” – or matches – against three other schools. Each bout consisted of four rounds, and each school was allowed to enter one poem per round, which can be either a team or solo piece.

Five random audience members judged each bout on a scale from 0.0 (the worst) to 10.0 (the best). From there, the highest and lowest scores were dropped and the winning teams moved on to the next round.

Ryerson was eliminated in the early stages of the competition, but Millado still says it was an amazing experience.

“The conference was great,” he said. “Now that we have bridged the gap, I am in conversations with the event organizers to bring more Canadian post-secondary institutions here in the future.”

“It was a magnificent experience,” he said. “It has really changed my life to see how the poetry world is in the United States.”

Despite all conference fees, housing and travel costs, the group has allocated half of the $3,500 donation toward next year’s event.

This tournament teaches competitors much more than the art of poetry “slamming,” though. In addition to the competitive side of the weekend, students have the opportunity to sit through workshops, panel discussions and other activities.

“Being a part of this Canadian team is fantastic because we are breaking through and creating opportunities for other Canadian universities to hop on board,” said Garcia.

This Week in Magical Thinking: Written on the Body