The Stanley Kubrick Exhibition is getting a Ryerson twist while it spends the next month at the TIFF Bell Lightbox.

The retrospective exhibit looks back at the famed director’s film career and background in photography through props and memorabilia. It will feature 12 screenings of Kubrick films introduced by a variety of Kubrick experts–actors from his films, critics, and even some of his family members.

“I am the low person on that totem pole of guests they have coming in,” said Nayman, who already spoke about Kubrick on the TIFF blog, titled “The F-Word(s): Kubrick’s Women, and will present a screening of the 1987 film Full Metal Jacket on Friday, Dec. 12.

The Cinemascope film critic, who currently teaches the Documentary Survey course at Ryerson, hosted his own Kubrick lecture series over the summer at the Miles Nadal Jewish Community Centre and the Revue Cinema where he screened and discussed a variety of Kubrick films to his audiences. 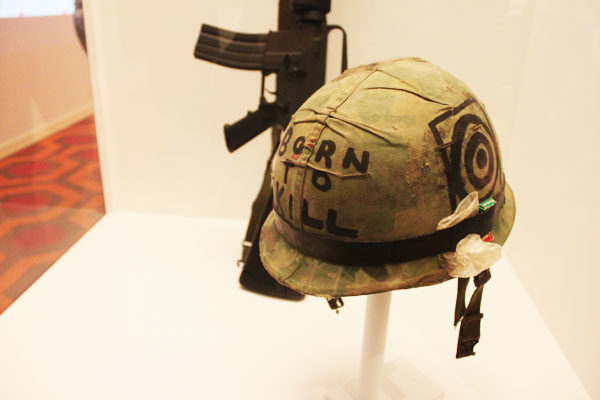 The helmet worn in Stanley Kubrick’s Full Metal Jacket. The film will be introduced at the Kubrick exhibit by Ryerson Professor Adam Nayman. (Samantha Sobolewski / The Ryersonian)

The success of the lecture series is one of the things Nayman thinks Jesse Wente, director of programming at TIFF, recognized when adding Nayman’s name to the roster of presenters for the exhibit. Nayman has worked with TIFF before; the venue helped launch his book It Doesn’t Suck: Showgirls with a screening of the film.

Nayman says it was “process of elimination” that landed him the introduction to Full Metal Jacket (naturally he wouldn’t be given the job to introduce 2001: A Space Odyssey with Trumbull being flown out to the exhibit). And although he doesn’t consider himself an authority figure on Kubrick to the extent of some of the other presenters, his previous relationship with TIFF, his experience writing and lecturing about Kubrick, as well as being a Toronto-based critic, all helped score him the job to give his thoughts on continuity in Kubrick’s works, auteurism and the violence in Full Metal Jacket before its screening.

It’s a job he says he truly appreciates, knowing how many pieces of work on Kubrick have been written by other critics in the past.

“One thing that Stanley Kubrick is not is under-discussed; he is not an under-discussed, under-considered, underestimated filmmaker,” said Nayman. “In Kubrick’s case, when I see that something new has been written I’m always excited to read it. Doesn’t mean it’s all good that I agree with all them, but something in his work tends to bring the best or most obsessive or most determined writing of almost any filmmaker I know.”

The exhibit features props and scripts from many of Kubrick’s films, such as The Shining, Barry Lyndon, A Clockwork Orange and 2001: A Space Odyssey, as well as hand-written notes and correspondences between Kubrick and other writers, actors and film agencies. But even if you don’t know much about Kubrick’s films, Nayman says that—other than to support intellectual film education the Lightbox provides its patrons and how “cheap and pretty cool” it is—the exhibition will have a special allure to students that attend.

“I think there is something about Kubrick that appeals to the adolescent,” said Nayman, quickly clarifying that there’s something illicit or transgressive about Kubricks films—whether it’s the violence or the bad language or the sex—that makes younger people really excited. They’re the same sensations Nayman himself experienced as a teenager watching Full Metal Jacket.

“I think that if students have that those feelings about the films, then going to the Lightbox, seeing the exhibit, seeing not just the cheesy idea of behind the scenes and how it was made, but seeing just how controlling and exacting and grown up the intelligence behind some of those really adolescent transgressive sensations was, is fascinating,” he said.

Kubrick’s family usually visits wherever the exhibition takes up residency (Kubrick’s estate is listed as a key collaborator to the retrospect), but Nayman’s name on the bill is one of the few changes made to the Toronto stop of the touring Kubrick exhibition. Other changes include the actual film-by-film layout (the Los Angeles stop organized their version by themes, according to Laurel MacMillan, director of exhibitions at TIFF) and the specific structural build of each room to help create the immersive environment, like the circular shaped room for 2001: A Space Odysseyand the specifically recreated carpeting to match the pattern used in The Shining.

The exhibition is the biggest one TIFF has ever put on, spanning 7,000 ft. and occupying both the main HSBC gallery and the fourth floor at the Lightbox. However, Nayman isn’t sure TIFF will be able to top this exhibition once it’s packed up and shipped to a new location.

“After Kubrick, I can’t think of too many others directors whose movies are going to lend themselves to precisely this kind of treatment because Kubrick’s movies have a lot of lure behind them, a lot of mythology, a lot of stuff,” he said. “I mean I love Martin Scorsese, but the props from Goodfellas aren’t the same as the props from The Shining.” 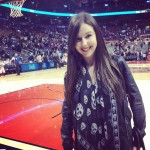