Rye professor, dog, and robot team up for rescue missions

Text by May Warren
Camera by Anam Latif

Dare, a 14-year-old black lab, dashes around a Ryerson classroom. Despite his age, he deftly dodges desks and chairs. He’s focused on his goal: finding a person hidden somewhere behind an overturned table.

There hasn’t been an earthquake or a building-collapse, but if there were, Dare could save lives with the help of a little robot he carries in a pouch that hangs below his belly.

It’s called Canine Assisted Robot deployment. When a rescue dog finds someone it barks and this triggers the pouch containing a robot to drop, and it could be a lifeline for someone who has been trapped alone underneath a collapsed building or a pile of rubble after an earthquake or another kind of disaster.

“Imagine if you could drop a water bottle and let them know, we’ll be back for you, we’re coming,” said Alex Ferworn, the Ryerson computer science professor who developed the technology. “That might be the difference between life and death. You may be in there for 48 hours. You feel horrible. You think you’re going to die. No one knows where you are. You’re really happy when the dog arrives.”

But, Ferworn explained, a rescue dog sometimes leaves a survivor once they find them and often human rescue teams can’t reach them immediately. The robot is designed to combat that.

The project was selected as one of five finalists for Science Slam, a European Union-sponsored competition in Washington, D.C. If Ferworn wins, he’ll travel to Belgium to present at a research conference with scientists from around the world.

The device could also be used to carry things such as medical supplies or a walkie-talkie, or it could be used to survey the area where the survivor is trapped, providing video to the rescue team. 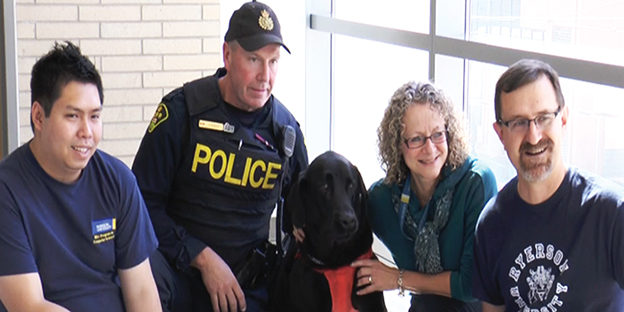 It’s the culmination of a series of projects Ferworn and a group of master’s and PhD students in the electrical engineering and computer science departments have been working on since 2005.

One of his students then suggested using dogs since they already know how to walk.

“And the beauty of this is you have to communicate with the dog. Most people give commands to dogs,” Ferworn said. “But now dogs are giving commands to an object.”

Jimmy Tran is a grad student who has been involved with canine rescue technology since the beginning.

Tran travels with Ferworn around North America testing their robotic systems on different sites such as Disaster City in Texas, which is complete with a mock rail disaster and collapsed mall. They are in regular contact with officials in the United States from FEMA (the Federal Emergency Management Agency).

His next step is to turn the prototype into a marketable reality.

“I’m going to re-engineer it so that it works robustly in the field, Ferworn said. “The urban search and rescue environment is harsh so it has to work all the time under various conditions…eventually we’ll be able to sell it to any search and rescue team that wants to buy it.”

Dare, who is 98 in dog years, won’t be going to Washington. After working with the program for eight successful years, he’s now retired.

“We had him up at Elliot Lake, at the collapsed mall. He was involved in locating persons in that,” said his handler, Dan Bailey.

Dare also found two people buried in the rubble at an explosion in a Woodstock apartment building in 2011.

The OPP was going to take a previous version of the project with them to Haiti to assist in canine search and rescue after the 2010 earthquake.

Unfortunately the whole operation was eventually called off.

But for everyone involved with the project, helping in a real disaster is the real goal.

“If I can save a life, that’s amazing,” said Ferworn.

If he can do it with a robot attached to a dog, that’s even more amazing. 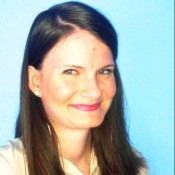