A group of Ryerson students is developing an app to curate Toronto nightlife. Noctem is an app, in its developing stages, designed to better answer the question, ‘What are we doing tonight?’

The app functions similarly to Spotify.

Users choose their vibe, ranging from a comedy bar to a club. Then, the app asks how adventurous the user is feeling, scaling from one to the ten. One, is drinks with your mom. Ten, is the side of you your mom doesn’t want to see.

Based on the user’s vibe, adventurous rank and location, Noctem generates a curated list of bars, restaurants, pubs or clubs that would suit the user’s night expectation. 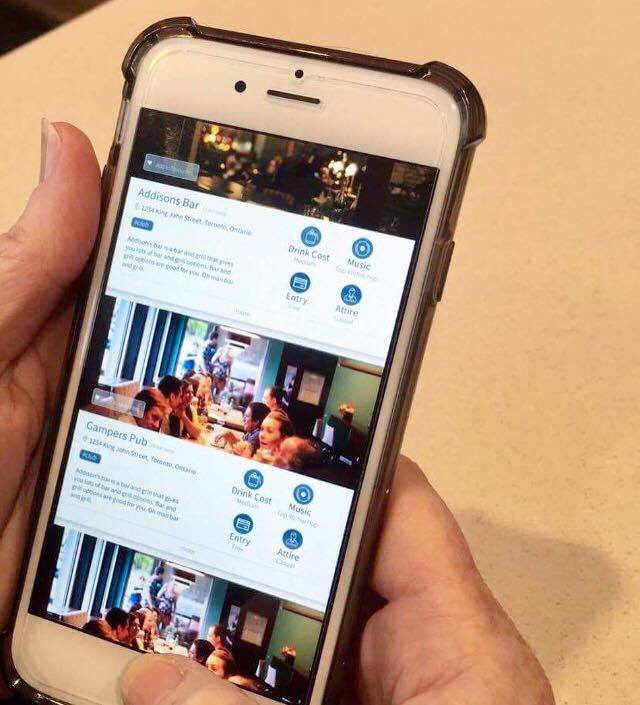 In the list, Noctem includes the dress code, cover charge and description of the venue. Users of the app can also contribute to Noctem by posting live feedback of a venue, like the length of a club’s line.

“Noctem originally came from me and my roommate walking back from a club and seeing all this energy at 1 a.m. from people going home. They were dancing and yelling on the streets and we were both like, ‘We need to turn this into an app,’ Kus said.

“So it’s always been about the nightlife experience, instead of just ‘finding stuff to do’.

Jade Watson, a fourth-year RTA School of Media student, is responsible for building Noctem’s list of nightlife venues. Instead of using code to scan bars and clubs, Watson hand-picks the venues on Noctem’s list to make it less like a computer and more like a friend.

“Manually, you get a real curated list and that’s something that no other app offers. Some will scan Ticketmaster, but it’s all based off computers and we wanted the app to be more personal — like asking your friend for advice.”

There are more than 375 venues on Noctem.

While the app is free for download, Noctem will generate revenue through a venue’s advertising.

“Basically how we’re going to make money in the future, is by having some bars rank number one on the list, if they pay for advertising,” Watson said.

Noctem is currently in its development stage with a total of eight Ryerson students working on the production.

During beta testing, the developers will gather user’s data and fix any bugs in the app. After its beta testing, Watson said she and the team will apply for space at the DMZ, to gain mentorship and funding to further grow Noctem.

Are you going to pass, or artichoke? We test students on veggie knowledge

How does one get in contact with Ryerson developers? I have an idea for an app and I’d like to collaborate with students who can help bring it to life.