The SAA is a joint Ryerson and George Brown cultural student group. They participate each year at NACS, where a dozen school teams from across Ontario gather to compete in a dance competition.

Last year, SAA missed first place at NACS by only a few points. Despite placing second, the team celebrated, having rebounded from a disappointing defeat the previous year when the team didn’t place and lost their two-year winning streak. 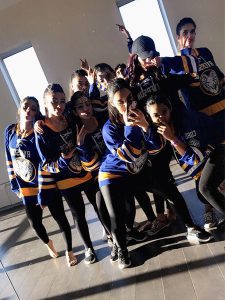 Some of the SAA female dancers after they finished performing and back in their team gear to watch the rest of the competition. (Photo by Ashin Khan)

Thivakar Arunthavarajah, the newly elected head coordinator for Ryerson, dubbed the team ‘Ryedemption.’ Determined to create a team with new members and get back on track quickly, auditions were held in September.

“The reason why I hold auditions so early is to have more time to organize things,” Arunthavarajah said. “It tells me where I want to be in the next couple months and what exactly to prepare for.”

Arunthavarajah wants Ryerson to bring “unique and weird” elements to the competition, a strategy that has helped them stand out before. Last year, Ryerson used these dance genres to bring to life the 2009 drama motion picture Slumdog Millionaire.

“It felt good because the team we brought back was a lot of new faces rather than old, it was a totally different environment,” Arunthavarajah said. “It proves that working hard and having a good time can get you somewhere.”

A few notable rivals, McMaster-Mohawk University, Guelph-Humber University, and last year’s 2017 reigning champions, Western University, are among the schools scheduled to face off against Ryerson this year.

University of Toronto Scarborough is also set to compete at NACS, and is just as eager to make a comeback. The school hasn’t competed in years, as their large size caused struggles in creating a team.

“The amount of dancers interested in competitions has decreased over the years,” said Renata Indar, head coordinator for the U of T schools. “I think our hiatus has been beneficial to us, dancers from U of T have had the opportunity to reignite their passion to dance.”

The 10 students on U of T’s executive team are all assigned different roles. This helps the dancers better prepare for competition.

“We’re using this opportunity as a comeback for U of T,” said Indar. “A lot of the other teams have a reputation and a standard to live up to, but we’re using this competition to set the bar for ourselves. We’re hoping to go above and beyond what people expect from us.”

The next North American Culture Show will take place on Saturday, Feb. 17 at the Rose Theatre in Brampton.