Ryerson’s formula racing team is driving their 2016-17 student-built race car for the last time on Saturday in a competition against other Canadian universities.

Ryerson Formula Racing (RFR) builds a new race car from scratch every year. The team is made up of students from programs including engineering, business and RTA. 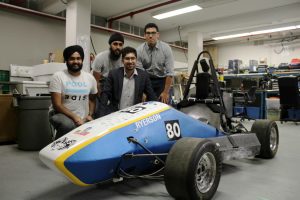 RFR then competes in the Formula Society of Automotive Engineers (SAE), an international university-level race car design and building league.

Shootout, the Saturday event hosted by University of Toronto, is taking place at the Mosport Kart Track in Bowmanville. Twenty-one Formula SAE teams will compete in the full-day autocross event.

Third-year engineering student Ariel Gil will be one of four drivers who will take a turn wearing a fireproof suit and strapping into the race car’s six-point harness during the competition.

“This race is very different because we’re just basically going out having fun on a track and learning,” said Gil. “It’s not a design thing this time, it’s more just proving how fast our cars are.”

He’s gotten up to about 100 km/h while driving — or so he thinks, since there is no speedometer on the race car. But he said it’s not about speed.

“It’s about the acceleration,” said Gil, lead suspension on RFR. “When you accelerate, it’s kind of like a rollercoaster. You just feel like your organs are left behind.”

“We were definitely an underdog last year,” said Holloway. “Now we do have to live up to our expectations, we have to be better.”

The team said this year has been one of their most successful years to date.

“We’ve been really surprised by how well we did,” said Gil. “But we earned it. We did the work and the car functioned.”

Back in May, the team placed first out of all the Ontario competitors at the Formula SAE Michigan Competition Series event. 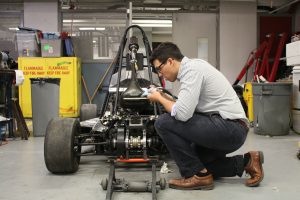 “At competition, we kept thinking something terrible was going to happen because it was just going way too well,” said team manager Mallory Maynard.

Maynard said the team members on the sidelines were clenching their seats during the last lap.

“We were expecting the car to blow up or something,” she said. “It was amazing that it finished.”