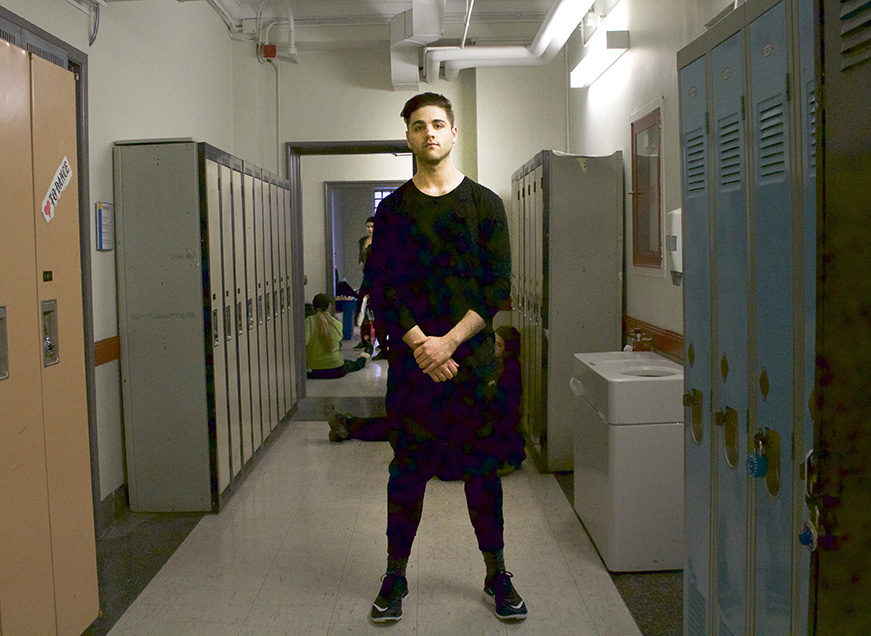 Danny Ghantous in the halls of the Ryerson Theatre School. (Courtesy of Jessica Albotra)

Fourth year Ryerson theatre student Danny Ghantous will stand in the spotlight this month at the Factory Theatre in Toronto, Canada’s first company devoted entirely to Canadian plays. Ghantous plays the role of a Palestinian teenager named Sadiq in the politically charged production, A Line in the Sand.

This is Ghantous’s first leading role outside of the Ryerson Theatre School (RTS). The 21-year-old actor has spent the last four years being coached and prepped for the stage.

“Ryerson’s theatre program is very well regarded in Toronto and in the theatre community,” Ghantous said. “It’s a conservatory program … We’re trained in movement, voice of speech and acting of all different disciplines.”

At Ryerson, Ghantous starred in RTS productions including Adult Entertainment, Scorched and the recent comedy You Can’t Take it With You. Ghantous said that jumping from this high-spirited play to the more serious A Line in the Sand was beneficial for his role development.

“You Can’t Take it With You was a very enlightening play. It was very bright and optimistic,” he said. “That really helped actually, in finding that optimism in Sadiq as a character.”

Sadiq is a 16-year-old Palestinian boy with aspirations to flee his chaotic home. A Line in the Sand follows the teen’s secret friendship with a Canadian soldier during Operation Desert Storm in the early 1990s. The merits and consequences of their emotional bond forces viewers to re-examine Canada’s role in the war.

Playwrights Guillermo Verdecchia and Marcus Youssef wrote the story in 1995. Despite its age, the play remains relevant during a time that’s rich with political discussions about Canada’s relationship with the Middle East.
“Being a Lebanese man with roots in Palestine … really helped me connect deeply to the story that Sadiq tells,” Ghantous said.

The tricky aspect of this role, he said, is that all of Sadiq’s lines are in broken English. “All of what he knows is from the media and pop culture. So finding the innocence, the naiveté … and his lack of interpersonal skills was the challenging part,” he said.

Ghantous will graduate from Ryerson in June. For any young actor — or any young adult, for that matter — transitioning into the real world is undoubtedly nerve-racking. Ghantous said that his biggest fear is having limits on the creativity he found easy to express within the RTS walls.

“Forcing myself into work that I don’t agree with, that I don’t find stimulating as an artist, is something I don’t want to do,” he said. “I just want to get out and audition as much as possible and really immerse myself in Toronto’s theatre community.”

Ghantous’s performance in A Line in the Sand will run from March 8-27 at the Factory Theatre.

This article was published in the print edition of the Ryersonian on Mar. 2, 2016.