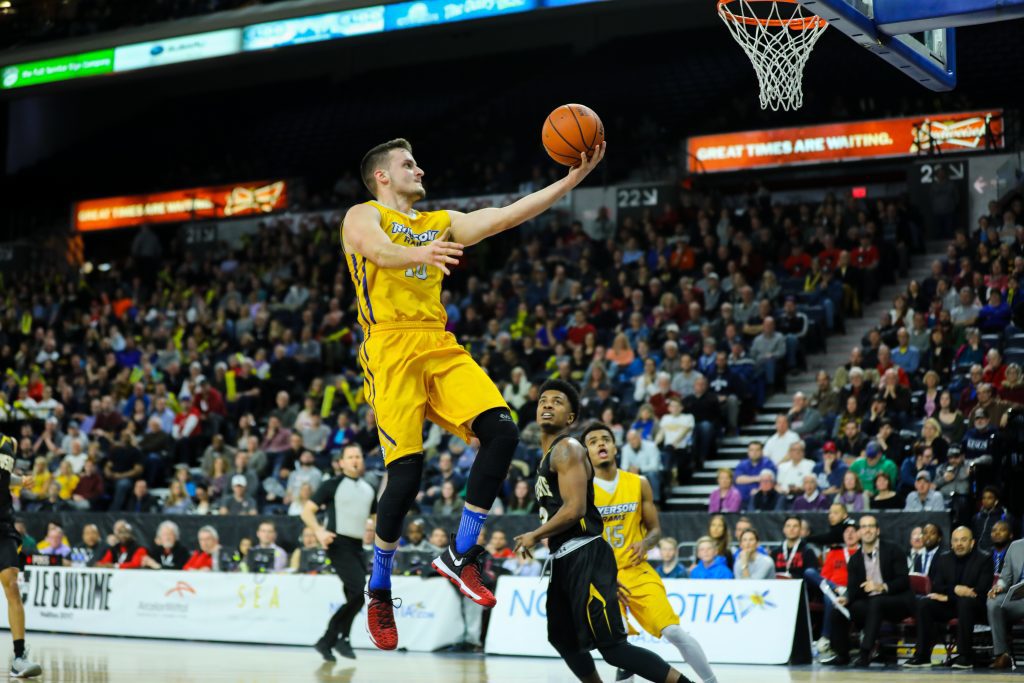 Filip Vujadinovic scores two of his game-high 16 points as the Rams advance to the national finals in Halifax on March 11. (Luke Galati/Ryersonian Staff)

HALIFAX — The Ryerson Rams will play for a national championship.

The Rams defeated the Dalhousie Tigers 59-58 on Saturday afternoon, finally cracking the barrier that had been insurmountable over the past two years.

After two consecutive third-place finishes in their previous trips to the national tournament, the Rams will finally have a chance to play for the trophy. And they’ll do it against their arch rivals, the Carleton Ravens.

“It’s a special win,” said Rams’ head coach Roy Rana. “I don’t think it’s really sinked in because we’re already moving on to tomorrow, but we’re saving it for a bit in the locker room and then get on the bus and try to get ready.” 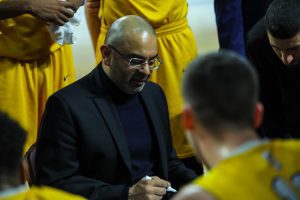 Roy Rana gathers his team in a huddle in the fourth quarter of the national semifinals in Halifax on March 11. (Photo by Luke Galati/Ryersonian Staff)

It was a tightly contested, physical game with fans of both colours on the edge of their seats. Through three quarters, it was anybody’s game, and it remained that way for much of the fourth.

Filip Vujadinovic was the story of the game for the Rams, coming off the bench and leading the scoring for the Rams with 16 points. Ammanuel Diressa added 15 and Adika Peter-McNeilly was named player of the game with 13 points and seven rebounds.

“I was just trying to be physical. That was my gameplan coming in,” said Vujadinovic. “I knew they were strong. I saw them against Alberta. I knew it was going to be a tough, physical game. I ended up getting some open shots, open layups and I just made the most of my opportunity.”

The first half was a tale of two quarters. Dalhousie exploded out of the gate taking a 16-9 lead into the break. Ryerson looked nervous in the backcourt and Dalhousie, to the delight of the hometown crowd, picked them apart both offensively and defensively. 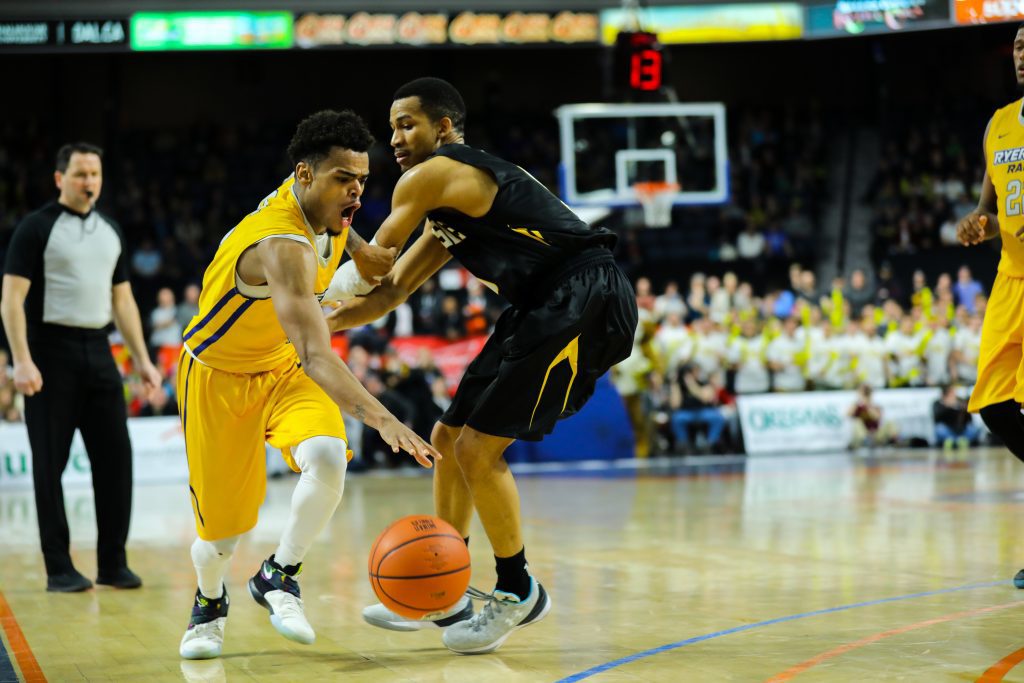 Myles Charvis blows past a Dalhousie defender in the 2017 national semifinals in Halifax. (Luke Galati/Ryersonian Staff)

But in the second, the Rams showed why they are the No. 1-ranked team in the country. The Rams outscored the Tigers 18-13 and held their first lead of the game within the last minute of the half.

Peter-McNeilly and Juwon Grannum each had 9 points for the Rams at the half while Dalhousie’s Jarred Reid led the game with 13. 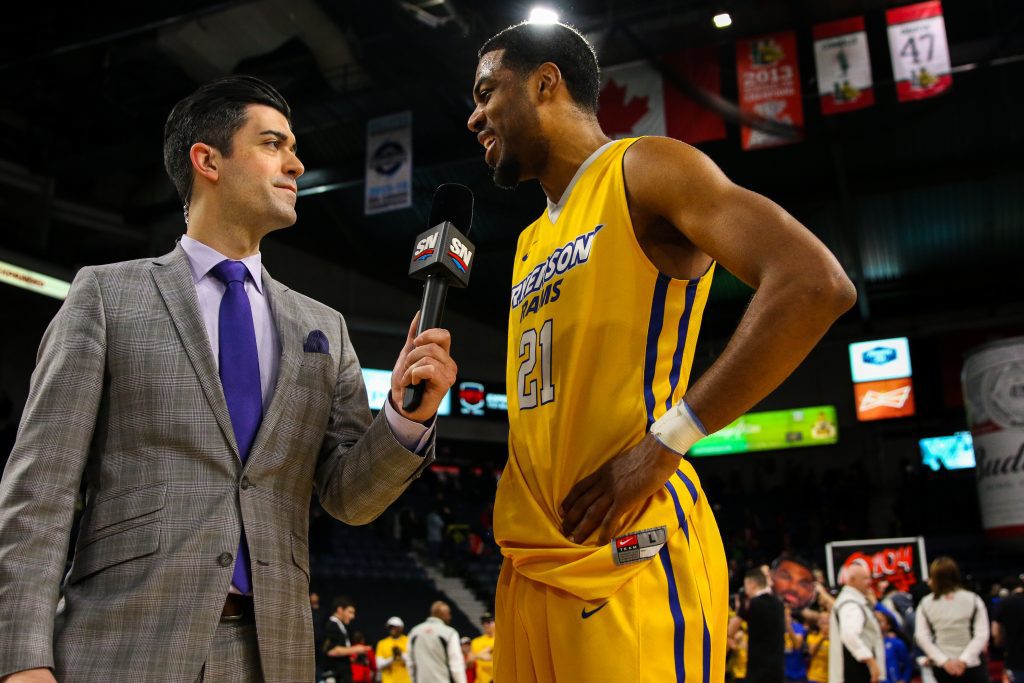 Adika Peter-McNeilly interviewed by Sportsnet reporter Brendan Dunlop, after the Rams’ win against Dalhousie in the semifinals on March 11. (Luke Galati/Ryersonian Staff)

For the Rams, it’s a chance to win gold for the first time in the men’s program’s history, a fact that isn’t lost on players or coaches. The women’s team played in the national final last year.

“It’s a tremendous opportunity,” said Rana. “We talk about the opportunity for these young men to play for a national championship. Something they’re going to remember for the rest of their lives.”

The Rams will play for gold tomorrow afternoon at 1 p.m. EST. The game will be broadcast on Sportsnet 360 and the Ryersonian will have comprehensive coverage all day. 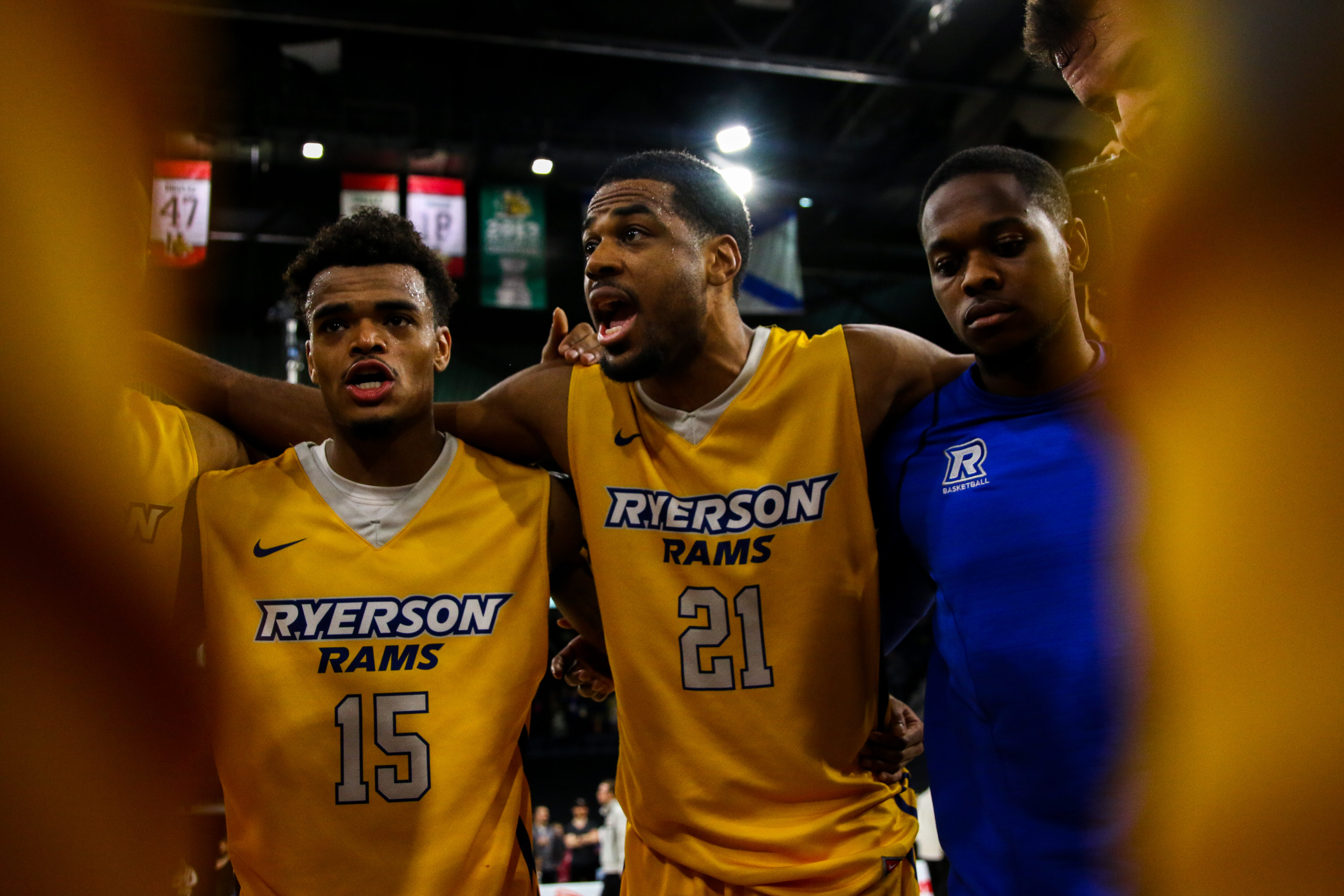 The Rams huddle at centre court after the team’s Final Four victory. They will be in action tomorrow, playing for the national championship. (Luke Galati/Ryersonian Staff)