As the excitement of the Toronto International Film Festival takes over the city, a group of Ryerson Image Arts alumni are getting ready to celebrate the world première of their new movie Cardinals.

Cardinals is the directorial debut from film studies grads Aidan Shipley and Grayson Moore. The pair previously worked together on Shipley’s fourth-year thesis film, the 2014 short film Dorsal, and Boxing (2015) for which they earned their first co-director credit. 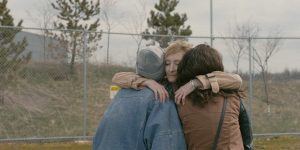 The movie tells the story of “Valerie Walker,” a former convict (Sheila McCartney) who is forced to hold on to a past she would much rather forget. The son of the neighbour she killed in a drunk driving accident comes to her door seeking closure. It soon becomes clear he may have other intentions as well. TIFF’s programmer of Canadian features, Magali Simard, writes that the movie boasts “razor-sharp dark humour [permeating] through a genuinely gripping psychological thriller,” with much credit given to Shipley and Moore’s strong script.

Heading into TIFF, Moore says he feels a mix of nerves and excitement.

“I’ve spent the better part of two years obsessing over the film,” he said. “All I’m trying to do now is enjoy it and be grateful. I’m hoping the audience appreciates that the film doesn’t hold their hand through the story, and that they leave the theatre thinking about it on their way home, whether they like it or not.”

Looking back, Moore values the film’s Ryerson connection as he attributes much of his professional knowledge and success to his undergrad. He says that the image arts program created “an atmosphere that [was] both competitive and supportive.”

Blake Fitzpatrick, the chair of Ryerson’s School of Image Arts, says the crew’s success “is a testament to their hard work and dedication to making films.”

“It is a major accomplishment to land a feature film at TIFF,” he said. “The film program has turned out many an excellent filmmaker and [they] are great examples of what can be accomplished in the industry. They are also in great company as successful grads of our program include Andrew Cividino (Sleeping Giant) and Jeremy Podeswa (Game of Thrones) just to name a few.”

Shipley and Moore’s professionalism and energy both on and off set helped them earn respect with their cast. Katie Boland, who stars as Walker’s daughter “Eleanor,” says her friendship with Shipley and Moore made working together easy.

“I felt very proud of them because they handled the pressures of being directors with such grace,” Boland said. “Aidan, Grayson and I always spend TIFF together so to now be able to show the movie to a Toronto audience, at this special time of year, is actually a dream come true.” 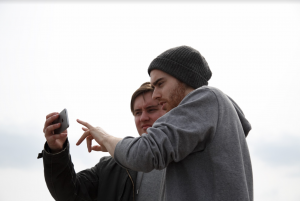 Aidan Shipley (front) and Grayson Moore (back) are Ryerson image arts alumni and the co-directors of Cardinals, a movie premièring this month at TIFF. (Photo courtesy of Grayson Moore)

TIFF has a long history of showcasing the work of Ryerson students and alumni both in starring roles and their behind-the-scenes crew. In 2015, Canadian actress Nina Dobrev, who studied sociology for two years before pursuing acting full time, premièred her movie Final Girls at the Ryerson Theatre.

“We have a massive sense of repping Ryerson through this première because none of this would’ve happened so early in our careers if it weren’t for Ryerson,” said Moore.

“We all feel so fortunate to have had the support of Ryerson from their first invitation to us to apply for funding, to completing the film. [It] means so much that many folks from Ryerson, our fellow alumni and friends, our faculty, are able to celebrate this with us,” added Margaret.

Fitzpatrick offered a special message of congratulations to Shipley and Moore.

“On behalf of the School of Image Arts and our Film Studies program I would like to extend my sincerest congratulations. It is so great to see your hard work paying off. I know that Aidan and Grayson have been working together since their days here as students and one of the greatest things that students discover in our film program is their crew, their collaborators that work with them in taking it to the next level. All the best.”

Cardinals premières at TIFF at 9:30 p.m. on Sept. 8 at the Scotiabank Theatre. It will also be screened to the public on Sept. 9 at the TIFF Bell Lightbox and Sept. 17 at Jackman Hall.