Ryerson University has publicly apologized to the mayor of Niagara Falls, Jim Diodati, for a student film made in connection with the School of Image Arts.

The four-minute documentary questions whether the city’s image of being a glamorous tourist destination is an accurate portrayal of the realities of everyday life in Niagara Falls.

The film “As Niagara Falls” frames itself on Vimeo as “a short documentary about Niagara Falls’ image to the world, and what truly lies within the city.” The video now has over 33,000 views on Vimeo. 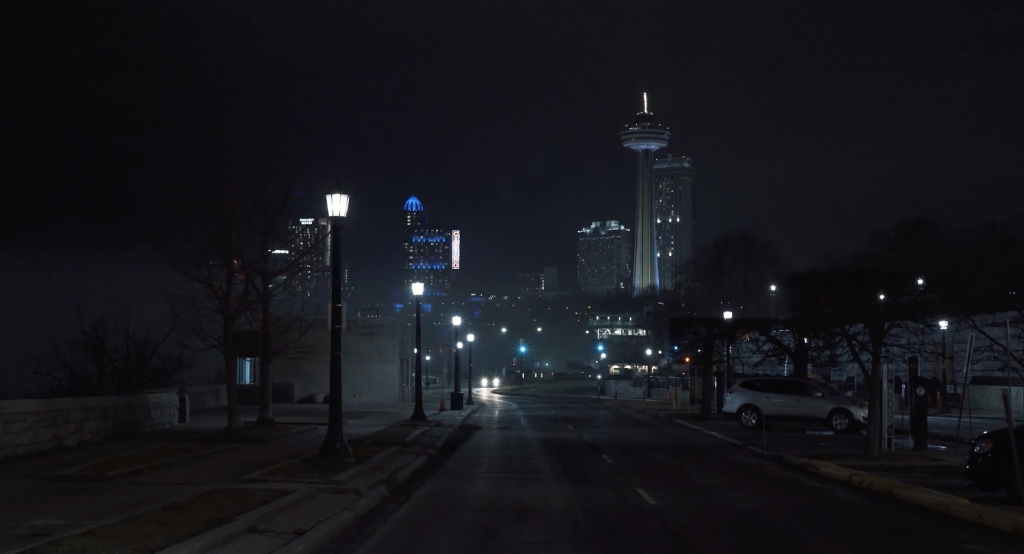 A scene from the short documentary, As Niagara Falls. (Courtesy Mayday Pictures)

The Ryerson logo was displayed at the end of the original cut of the film, in addition to Ryerson’s School of Image Arts, which has since been republished independently.

“The opinions expressed in this film by some of our junior students do not represent the opinions of Ryerson University or the School of Image Arts,” Ryerson president Mohamed Lachemi wrote, according to an article written by Niagara Falls Review. “We will be asking them to remove the Ryerson University logo from their documentary.

“We do apologize for any negative feelings generated by their work,” he wrote.

Mayday Pictures, the production company of student filmmakers at Ryerson who produced the film, has responded on Facebook, writing: “‘As Niagara Falls’ is a student film intended to spark a conversation about attributes of the city that need attention. The reach and publicity following it is the true statement we aimed to portray. Many have shared the film because they stand beside the problems addressed and agree that it needed to be talked about. If this was not an issue the city was facing, then the film wouldn’t have received the attention it has.”

The post added that, “We stand by the film’s message and intent aimed for people of the city to share their opinions, experiences and input to make Niagara Falls everything they wish it was. If change and progress for the city is the outcome of this situation, then this film has done its job.”

A comment on the video written by Matthew Welke said, “The mayor’s response to the video, where he claims that it’s inaccurate because there are nice areas too, doesn’t surprise me. That kind of attitude infects the city, and the entire region there. There is a massive socioeconomic problem there and people are really struggling. But the leadership doesn’t seem interested in acknowledging it, let alone fixing it. The reaction this video got is a perfect example of why it’s so important for videos like this to be made.”

An account named “Benque Getaway,” which was created shortly before the time of this article’s publication and follows the student production company who made the film, wrote, “This is an extremely accurate depiction of Niagara Falls.”

‘Benque Getaway’ added that, “Having lived there for 10 years and managed numerous multi-million dollar projects, the city was plagued by extreme corruption.”

In the story written by arts and entertainment writer John Law at Niagara Falls Review, Mayor Diodati said that the dialogue the film has created has been useful.

“Some people are downright negative and cynical, and they probably always will be, but I do really appreciate constructive criticism,” he said.

Antonio Amodeo wrote on Vimeo that, “We should be applauding these students, their content has struck a chord with its viewers — there’s definitely a conversation to be had here. You know you’ve hit a nerve when the mayor of the city feels compelled to write a defensive response.”

In June of 2016, the city of Niagara Falls announced that they were partnering with Ryerson to try to bring post-secondary education downtown, according to Niagara Falls Review. Niagara city council hired a consultant in 2013 to study the potential of a downtown university or college.

The short-film can be watched in full here.

The more I look at this, the angrier and more disappointed I am. The young generation should be encouraged to speak up. They should criticize the government; they should point out what’s wrong with our society. We need them to make the necessary changes in the future because as we can see, things are far from perfect.

Ryerson claims to be the ‘urban university’; they spent millions of dollars creating a campus off Yonge Street. But in this incident the school sided with the politician and threw their students under the bus. I am very disappointed and I feel bad for the students, as they have done nothing wrong. They were not making a tourism promotional video, they were making a documentary so it should bare the truth. I think the president of Ryerson University has made a very bad judgement call. #ryerson

It’s all about the tourists and GO TRANSIT. As a wife of a bus operator of Go Transit and what a resident sees on a daily basis of run down and vacant buildings. The mayor of Niagara Falls cares about GO TRANSIT and who cares if Greyhound and Coach Canada drivers loose there jobs! These old buildings needs to go and build new buildings to bring business to downtown areas. “THE Q” street which is Queen Street is the biggest jokes. It should be like Niagara On The Lake main street. But I’d you want people to shop in St. Catherine’s okay be like that. Build more condos as people from Toronto are moving this way to live.
Ryerson University students had every right to film this video. Mayor of Niagara Falls your just embarrassed of what these students did.

I live in the Falls and am upset with the minimum wage go now where urban decay that the short film depicts. Our mayor should respect ACADEMIC FREEDOM or artistry and actually try to improve the city for his majority of workers etc that work here and barely survive. Now were’re getting some Toronto dyspora over inflating a dead city driving more locals on this minimum wage scheme here either working harder many with two or three part time jobs just to pay inflated rents or have to move away.

Most locals I’ve seen on local news sites support the people that made this short film.

Please make a 30 minute plus movie and show what’s going on in this phony city. Talk about bad roads, jacked up hotel rooms, rising rents with no economy, and loaded local elites cruising around in very expensive Italian super cars.

Dan Kurina (Brother of Alex Kurina of I met The Walrus fame.)

Instead of protecting their students and their right to freedom of expression, the university’s representatives have an embarrassing reaction. Bravo to the students who attract the attention of a mayor who feels uncomfortably touched by reality.
Honestly, I hope one day one of them becomes a celebrity in the movie industry, and will never mention
that he’d ever studied in this University. That would be a great universal revenge. Good luck guys !!Shame Rayerson!!!