Ryerson is hoping to avoid another bust in its second application for a startup hub in Niagara Falls.

Since 2015, Ryerson has been trying to set the groundwork for its Niagara Falls Research/Innovation Zone (NFRIZ). 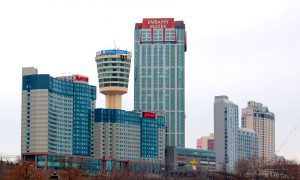 The idea for a hub in Niagara Falls is modelled on Ryerson’s existing startup incubator, the Digital Media Zone. (Photo by John Vettereli via Flickr)

As Ryerson waits for approval on its application to the federal government, some Niagara Falls city councillors are wondering where the multi-million dollar expense would go.

The zone is being modeled on the university’s existing start-up incubator, the Digital Media Zone.

Some of Niagara Falls’ city council are hoping the zone will bring businesses to the downtown area and help turn the city’s downtown around.

According to a leaked copy of the first application, the zone will take up a significant amount of space in the heart of the city — about 4877 square metres. The total cost of the project is estimated to be $33 million. That total expense will be split between private investors, federal innovation grant funding, funding from Ryerson university, and funding from the city of Niagara Falls.

The exact breakdown of zone’s expenses has yet to be been made available to city council and the public.

“It is far too early in the process to make those kind of calculations,” Ryerson president Mohamed Lachemi told the Ryersonian. “The impacts of a project like this are quite diverse and decisions must reflect the range of partners and stakeholders involved. Many more factors need to be confirmed before any firm cost calculations can be made.”

Niagara Falls mayor, Jim Diodati, told city council the city is expected to contribute $4.2 million to the project, over a five-year period, if the zone is approved for funding by the federal government.

Niagara Falls city councillor, Kim Craitor, said he has not seen Ryerson’s application for the zone and is unsure what the city’s money will be spent on.

“If approved, the city has to make a decision of [whether] it wants to put money into the zone or not. I was a provincial member of parliament for ten years, I’ve never seen [a situation] where a partner puts in an application but doesn’t show the other partner,” Craitor said.

Some council members have said that the closed-off process, where members don’t see the deal until it is confirmed, made them skeptical about the efficacy of the project and its proposed benefits for Niagara Falls.

“The zone isn’t a campus. No one can take classes there. What do they need $4.2 million for? Our downtown is a bunch of derelict buildings and we already have a start-up incubator. It cost us $400,000,” said Niagara Falls city councillor, Carolynn Ioannoni.

Diodati said the expense is for, “operating and programming costs,” and the current obligation is, “actually less onerous because our financial obligation is less.”

In addition to the $4.2 million contribution the city is expected to put forward under this review, “there will also be some land and building space dedicated to the project [by the city],” said Serge Felicetti, director of business development.

Where in downtown Niagara Falls the proposed zone is supposed to land is unknown. However, council’s in-camera meeting to discuss pursuing the zone’s first FedDev application did include mention of a, “proposed acquisition or disposition of lands related to,” 4320 and 4327 Bridge Street, as well as 4601 Park Street, Niagara Falls Review reported.

When funding was denied and Mayor Diodati restated his commitment to the zone, he said it will likely be in the Queen Street and Erie Avenue area. That will link the zone with City Hall and the future GO Transit hub on Bridge Street, Niagara This Week reported.

“An ideal location is based upon a number of factors, including available space, objectives of the partners for the location, existing activities, existing and future infrastructure, plans for the local area, fit to the partners, etc,” said John MacRitchie, Ryerson’s senior director of business development and strategic planning. “We continue to work with the city of Niagara Falls and other partners on the selection and development of the location.”

Asked how similar the current application is to the rejected one, Felicetti told council that Ryerson took comments from FedDev, revised the application and resubmitted it.

Though councillors have noted they were briefed more thoroughly ahead of the current submission than the previous one and that city staff have stressed the financial obligation is less for the city, not all are convinced the benefits outweigh the costs.

“Council is befuddled,” Ioannoni said. “Students can’t use it, only businesses can use it and even then they have to compete. I can see that working in New York or Toronto, but I do not see it working in Niagara.”

“We put all kinds of money into downtown to rejuvenate it when I was an MPP and we always looked at it like a retail region but those days really are over,” Craitor said.

Craitor added that he hopes funding the Zone could reverse the trend even if it is unclear exactly how.

“I don’t know if the public quite understands what the zone is for, but some in the business community are excited about it. They’ve been coming up to me. There are a lot of auctions for space downtown and Ryerson is a credible institution and if they’re willing to put the application, you have to look at that seriously.”

But Craitor said he has not made up his mind about the final project yet.

“I was told if it was approved, we would see everything and decide if we want to do it. We asked: ‘How can we approve an application if they’ve already approved the funding?’ They said we can say no at the end,” Craitor said.

Others on council, however, said they understand the need for confidentiality during the application process and see the zone as a prime opportunity.

“I needed to know what I needed to know and the mayor is the elected head of the council, I’m not going to micromanage him. If he can’t give me information, I assume that’s because of the confidentiality and we don’t want to lose anything. I put our trust behind the head of our council to make the right choices and to tell us what we need to know at the time,” said councillor Joyce Morocco.

“I think it’s a great opportunity for Niagara as we’re trying to keep and retain our youth in the city.” Morocco added.

Coun. Morocco also said that the Niagara Falls zone will offer benefits to the city that the current incubator can’t offer.

“The zone gives us more selection. More companies in tech are looking to work with Ryerson and that gives us a bigger door,” she said. “I just don’t see it not being a good fit.” 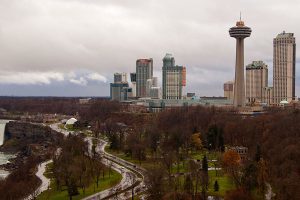 No word yet on where in Niagara Falls the proposed zone will be built. (Photo by Jason Pratt via Flickr)

Ken Todd, the city’s chief administrative officer, told council in October that it hopes to use money obtained through the Ontario Lottery and Gaming Corporation (OLG) to pay for the zone. Todd called it a “non-tax item”, which the city has used in the past to pay for roads, parks and other infrastructure.

“We, as a staff, feel on an application like this -following up with your strategic priorities, in terms of youth retention, job creation, downtown redevelopment – we feel that expenditure of $800,000 a year over five years would meet all of those strategic commitments and again the funding would come from non-tax,” Todd said.

Councillor Wayne Thomson, said, “We were unsuccessful the first time, we do not know why, but we’re taking another run at it.” He noted Niagara’s casinos hand the city several million dollars every year through the OLG program. “Niagara Falls is, without exception, one of the luckiest communities in Canada,” he said.

Regarding finances, Morocco said, “we’ll do whatever we have to, to make it work.”

The city said it expects the review process to take three to four months.