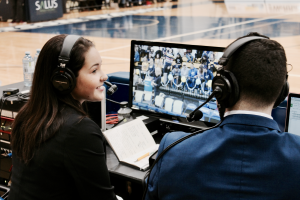 At the Delbrook Community Centre in North Vancouver, the hardwood floors are dark with dead spots. It’s not shiny, glamorous or polished, but it’s home. Parents line the sides of the court, sitting in chairs watching their children play in the Steve Nash Basketball League.

This is where Hills, now 22, first fell in love with basketball after crossing up a girl in front of her parents as a nine-year-old.

Thirteen years later, her passion for the sport has been a journey of twists, turns and new beginnings. This weekend marks a special milestone for Hills. She’s the play-by-play voice of the 2017 U Sports women’s national basketball championship in Victoria on Sportsnet, broadcasting across the country. All while still being a student. But how did she get here?

Growing up, Jaime was raised by her mother, Jennifer Hills. She’s a bookkeeper by trade, managing the taxes and finances for businesses on the West Coast. “The opposite of the route my daughter has taken,” Jennifer says. She raised her as a single parent.

For the first year of her life, Jaime and Jennifer lived in a basement suite in her grandmother Sue’s house. “My mom helped me with her when she was a crying baby. That was special,” Jennifer says.

While growing up, Jaime says that she now realizes how impactful these women were in shaping her into the person she is today. “My mom, she was able to do what she did because of her mother, Sue. And I’ve always been surrounded by kick-ass women,” she says. “My mom was some sort of superhero.”

Her mother says that she never thought of it as a hardship. 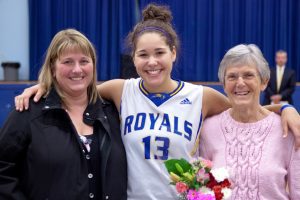 Jaime Hills with her mother, Jennifer, and grandmother, Sue, after a game. (Courtesy Neil Dixon)

Her grandmother, Sue, was the owner and founder of Sue Hills Fitness, a Vancouver staple that Jaime says was a pioneer in the industry. This was well before the mainstream recognition of just how lucrative the fitness industry can be. Jennifer admits that she grew up known as Sue Hills’ daughter and experienced the impact of being the child of “a local celebrity.”

“Just those two being so successful as women showed me,” Jaime says. “I never thought anything other than women being amazing at their jobs because that’s what I was surrounded by. My mom and grandma did amazing things. So why can’t I?”

Hills was raised as a multi-sport athlete, with multi being a vast understatement. Growing up, she played: field hockey, soccer, volleyball, synchronized swimming, speed swimming, softball and basketball. She decided to focus on basketball because it gave her a feeling that no other sport could. When she crossed a girl over and scored that bucket in the Steve Nash League at Delbrook Community Centre, it was instant gratification. 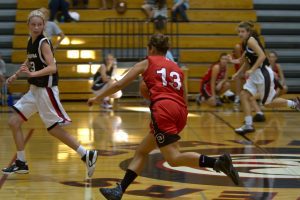 She then joined 3D Basketball, a British Columbia basketball program that emphasizes the importance of discipline, determination and dedication. When Hills looks back, she remembers one coach who made a profound impact on her as an individual.

Thomas Staron is the executive director of the program, who had the keys to a local high school gym and would train Jaime. It would be just the two of them shooting around, learning new drills to advance her game throughout high school. If Jaime ever needed someone to talk to, Staron was there for her.

But he also knew just what made Hills tick, often using this to motivate her, even when it would get under her skin. “Sometimes, I used to hate him,” she says. Staron had a rule that Hills couldn’t leave the gym until she hit 10 free throws in a row.

She kept hitting eight or nine and missing. Always close, but no cigar.

“I was there standing at the free throw line. I kid you not, I was crying. I wanted to go home, my mom was there waiting for me.” But Staron told her she needed to hit 10 before packing up.

“When you set a goal for yourself, if I think that you can achieve it, you can do it,” Staron says. “If she left at only eight or nine foul shots, she’d be disappointed in herself.” 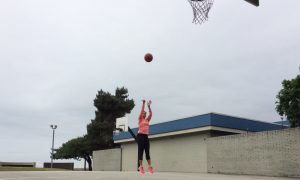 Hills says that this taught her the importance of setting short-term goals to get through adversity. She went onto play basketball at the University of British Columbia while studying kinesiology.

Her mother says she was happy when Hills signed to the hometown team, UBC. Being someone who developed a love for watching basketball, she got to watch her play at any home game that she wanted.

But she knew that Jaime wasn’t happy with her program of study. “The most important thing is that your kid is happy,” Jennifer says. “It’s not about me, but what she’s doing.”

Jaime had found a brochure for Ryerson University’s new RTA Sports Media program. She took one look at it and knew that Toronto was where she needed to be.

Leaving the basketball team at UBC was tough on Hills. When she came to Ryerson and got into the program, she wasn’t even going to play basketball, she says.

She came to Toronto to check the school out. Jaime and her mother met with Ryerson head coach Carly Clarke. Jaime was really taken with her. She had some workouts with the team and decided that she wanted to lace them back up and return to the game. 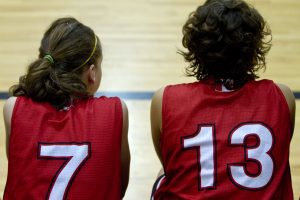 Last year at nationals, veteran broadcaster Arash Madani was calling the games in Vancouver for Sportsnet. He was introduced to Hills through Carly Clarke, with whom he went to school, at Bishop’s University. They had a nice conversation while Hills was a player, but that was that. Or so it seemed.

She asked him if there was any chance to be on air at nationals and sent him footage of one of her broadcasts, hoping for the best. Madani remembers that he was on the road covering the Toronto Maple Leafs in Philadelphia when he got the email.

He opened his laptop and gave it a look. “I was actually blown away by someone who is still a student, by the way she articulated,” he says. She had good timing, with good pace, he remembers. And, more importantly in Madani’s eyes, Hills didn’t just state the obvious. She contextualized why things were happening, breaking down the game in a seamless manner.

He told her that he’d introduce her to a producer. “Then, they wanted to hire me for the weekend and it really took off,” Hills says.

Hills enjoys teaching people the nuances and educating them on the game. This started for her when she took pleasure in showing her mom how the game worked while watching NBA broadcasts in high school.

By having her understand and see first-hand how excited her mom got when she explained the game to her, she took pleasure in the process. She liked giving her the education that a basketball fan needs to thrive. “I know that I’m not a professor, but in a way, when you’re doing analysis, you are teaching. You’re taking the knowledge that you have and stating it in a way for people who might not.” 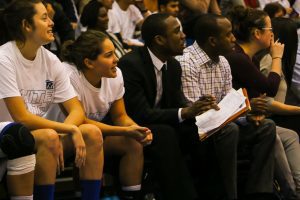 Jaime Hills at a Ryerson Rams game against Carleton in 2016 at the Mattamy Athletic Centre. (Luke Galati/Ryersonian Staff)

In one year, Hills went from competing at nationals as a player, to calling the games — a total 180-degree switch-up, all within the game that started for her inside the walls of her local Vancouver community centre. While the name of the league has changed, players have come and gone, and the location of the tournament has changed, her love for the game remains.

“What [Jaime is] doing right now is just the beginning,” Madani says.

Jennifer says that she’s proud to see her daughter continue to set her sights on her goals. Just like when she watched her nearly cry trying to hit 10 straight free throws with coach Staron. “Jaime keeps trying at it and that’s why I think she’ll be successful. She just works hard.”

Just like they’ve always been throughout Jaime’s life, her mother, Jennifer, and grandmother, Sue, will be supporting from the sidelines. This weekend, they’re both in Victoria. But this time, they’re choosing not to watch the games in person so that they can watch Jaime live on the Sportsnet broadcast.

Hills says that her decision to focus on her broadcast career boiled down to one philosophy that she lives by. “It came down to what was going to make me happy. And it sounds so simple, but whatever you’re going to pursue in life, whatever makes you happy is what you need to be doing. There’s no point in being unhappy.”