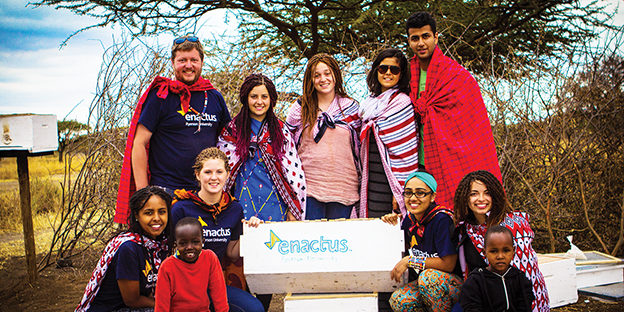 Members of Enactus Ryerson took a trip to Dago, Kenya in March of last year to teach financial literacy.

A Ryerson team believes bees and better financial literacy can help change the world, and they’ll test their theories at the Enactus World Cup in Cancun next week.

Enactus is an international non-profit organization that brings together students and businesses to improve quality of life through entrepreneurship. Its board of directors boasts bosses from big name companies including Walmart, Unilever, and KPMG.

“There are 1,600 (chapters) around the world. Ryerson right now is in the top 37,” said Curtis Yim, president of Enactus Ryerson.

“We’re proud to say we’re representing Canada and we have a strong chance to bring the trophy home.”

Judges evaluate the projects with an eye for how the teams have applied business concepts to empower others, while keeping environmental, economic and social factors in mind.

Based on that criteria, Yim thinks their initiatives can hold their own.

One of their initiatives is StartSmart, a life skills program with an emphasis on financial literacy and independence. The project includes outreach in shelters, youth counselling centres and high schools.

“We want to focus on building their confidence as individuals, so that they’re confident enough to find a job and later apply their financial literacy,” said Yim.

Yim believes this kind of outreach is more effective than food and money handouts which, while providing short-term solutions, do not equip individuals with the skills they need to survive.

Tyler Baird, a recent Ryerson graduate, introduced beekeeping as a new job opportunity in the village last year. The initiative is part of Enactus Ryerson’s Project Dago, also to be showcased at the World Cup next week.

“I grew up in the country near Orangeville and my family actually does beekeeping. So I started doing some research and we found that it was actually a really good idea for the village,” said Baird. “This is a small village with only a certain amount of jobs and most of them are in farming. We found this as a chance to introduce a new job opportunity to the village.”

When Baird returned as project manager this summer, Dago residents had added six more beehives to the four he helped build in 2012.

“The work they had done on their own was phenomenal … that told me they were very interested,” he said.

Enactus Ryerson has been involved in Dago for three years, also providing micro-loans, solar panels, and financial education to men and women in the community.

“Tying all these things together made a sustainable project for this village to build a better future for their children,” said Yim. “They used to burn beehives and get the honey for the short term, but now they can sell the honey and innovate. Now we’re looking at how we can make Dago the honey-producing capital of Kenya.”

Project Dago and StartSmart will be showcased along with Enactus Ryerson’s StartMeUp program, which helps start and expand businesses on campus.

All three projects will square off from Sept. 29-Oct. 1. 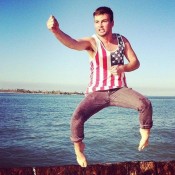 Brian graduated from the Ryerson School of Journalism in 2014.

Brian graduated from the Ryerson School of Journalism in 2014.