Ryerson’s Catholic students now have a new place to call home in a former house located near campus.

The Ryerson Catholic Students’ Association opened the new student centre on Nov. 20 with “laughter and excitement,” said Allison Belen, president of the group.

“There was a sense of belonging and ownership. There was an excitement and pride to belong to something that we could call ours and to share that with friends on campus within and even beyond a Catholic community,” Belen said.

The three-storey building located at 200 Church St. includes plenty of outlets to charge cellphones and laptops, a kitchenette and space to study and chat.

While the furniture is in place, the planned TV screens and Wi-Fi network have not yet been installed, said Melissa Siu-Chong, vice-president of events.

It will be the first time Ryerson’s Catholic students have had a steady meeting place since 2010 when the Toronto archdiocese closed down the former chaplaincy centre located behind the theatre school.

Since then, Catholic students have been meeting all over campus, including the cafeteria.

But meeting and praying in public areas can be distracting, says Cesar Membreno-Hanon, a second-year civil engineering student.

He remembers students making “unpleasant noises” to a group member while she was praying in the cafeteria.

Belen says that having a space will benefit the group’s commuting students. “The fact that Ryerson is a commuter campus, we are encouraging and fostering that community as a Catholic family. It’s going to enrich students’ experiences while they are here and in their faith journeys.”

Siu-Chong is excited that more collaborative events will happen in the future.

“Our last monthly dinner of the semester will be with the Caribbean Students’ Association. But it’ll be the first dinner in the new house,” she said.

She says that the rector, Rev. Michael Busch, “was really one of the people who was the driving force behind encouraging the diocese to consider using that space for the Catholic student centre.”

The group also had the support of Cardinal Thomas Collins, who let the students have the space.

The three-storey building, attached to St. Michael’s Cathedral, was originally a family residence, then used as storage and, later, office space for a construction company, says Bertucci.

The house has been under renovations since last spring. “We had to make it accessible,” says Bertucci.

The cost for renovating the former house to a new student centre was $1 million. The money was donated. 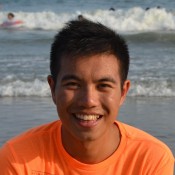