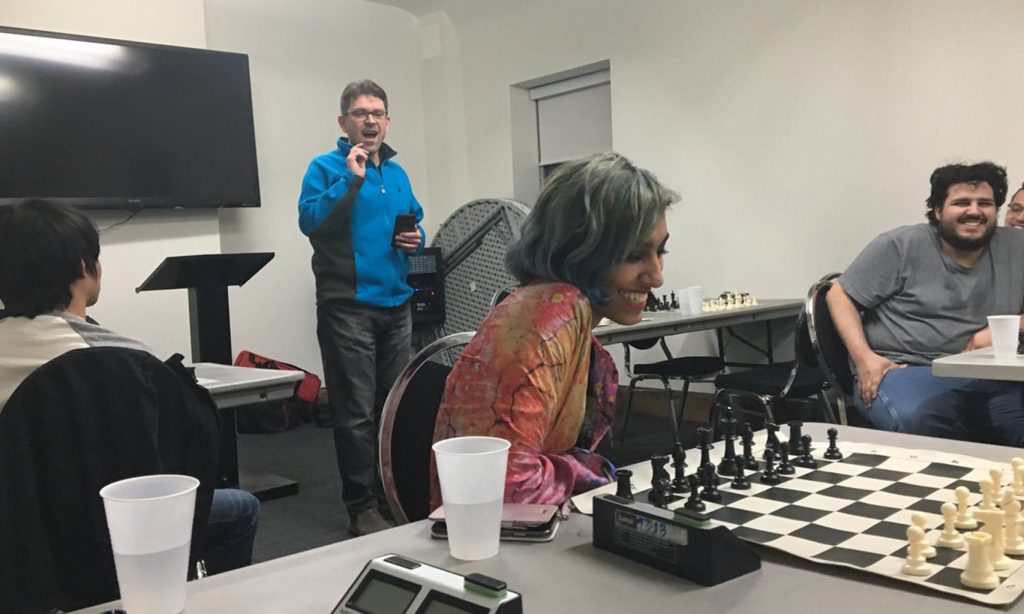 The crowd of roughly 10 people listened attentively to Saša Kulić, a Canadian-Bosnian titled chess instructor as he dissected two matches: a bullet game between him and another player online and a match between grandmasters Anton Korobov and Victor Bologan.

The chess club has been meeting weekly since 2013. This year was the first time in the club’s history that a guest speaker was invited, but the second time they invited Kulić to join them.

The crowd buzzed as Kulić made the final moves in his bullet game. With only a minute each to make their moves, bullet chess forces players to think fast — often at the expense of elaborate planning. His opponent’s checkmate pattern was particularly sophisticated given the time limit he had, stumping even the stronger players in the club. When Kulić unfurled the puzzle after his king had been cornered by two knights, the chess fanatics were awestruck. “That’s a beautiful mate,” said one member.

Inviting experts is always fun and informative, he says, as they provide unique insights into the game. Chess requires both immense concentration and creativity, and the game’s best players can see patterns and variations that average player may not spot. To a weaker player, witnessing such analysis borders on clairvoyance. “We’ve never heard of (some of) these concepts before,” said Saltat.

There wasn’t a particular theme to the matches Kulić showed, but they both emphasized the importance of pawn structure. “This is what grandmasters worry about (particularly in chess’ endgame,)” said Kulić to the disciples. It may be tempting to leave pawns hanging early on to control more space initially, but as the game wears on and pieces get exchanged, having a solid pawn structure will help immensely, as his two matches proved.

While the club has struggled with membership numbers in the past, this year has seen a resurgence in interest. As a result, they’ve been able to run more events, such as Kulić’s lecture.

Kulić carries a highest Elo rating of 2214 from the World Chess Federation. For comparison, the average player carries a rating of around 1000 and Magnus Carlsen, the number one ranked chess player, carries an Elo rating of 2843.

He called his time with the chess club “a very enjoyable experience” and was encouraged by the enthusiasm, noting that “some players have made great improvements.”

This semester, the chess club meets on Wednesdays at the Riel room of the Student Campus Centre (SCC).

At a glance, chess can be a very confusing and difficult game.  To help familiarize you with the sport, Nick Dunne will show you the basics.

I am looking for a job as a chess instructor. If you have any vacancy please let me know. I will send my resume.