The head coach of Ryerson’s men’s hockey team spends his days on the ice with 28 competitive players. But after work, he goes home to his two young daughters running around the house with their mini hockey sticks, looking forward to watching their dad’s next game.

Johnny Duco hopes that by the time his daughters grow up, the road will be paved for women and men to be treated equally when it comes to job opportunities. But if they choose to pursue leadership or coaching roles in athletics, the road may not be as smooth as he hopes.

According to a guide developed by the Female Coach Mentorship Project, the number of female head coaches in U Sports has steadily declined over the past few years.

Allison Sandmeyer-Graves, the CEO of the Canadian Association for the Advancement of Women and Sport and Physical Activity (CAAWS), says about 25 per cent of all coaches in Canadian sport are women, but that number is disproportionately at the grassroots level.

As you move into the higher performance spaces, the number of female coaches starts to dwindle.

“Cultures that are male-dominated are not always inviting spaces of women to be in. It’s tough being the only woman around the table or the only woman in the locker room. Your perspective, your voice, isn’t always heard,” she said.

“That’s a huge leap for a lot of women to make, so that makes Kori extremely rare.”

“Kori” is Kori Cheverie, who broke barriers last year when she was hired alongside Duco as an assistant coach of the Ryerson men’s hockey team — the first woman to join the coaching staff of a men’s hockey team in U Sports history. 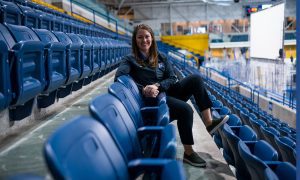 Cheverie was the first female hired as a coach of a men’s hockey team in U Sports. (Photo by Natasha Hermann)

“I felt a lot of pressure, especially just growing up and being in an environment of hockey — there’s a lot of pressure anyways, so now having that spotlight on me as being the first female in the college men’s world, it was a little bit daunting,” Cheverie said. “But, I was excited.”

Dairy Farmers of Canada and the CAAWS released a report in 2016 that documents women’s participation in U Sports leadership roles compared to men.

The number of women working as assistant athletic directors and assistant coaches is noticeably closer to the number of men working in those positions. But for leading roles, the gap is much larger. 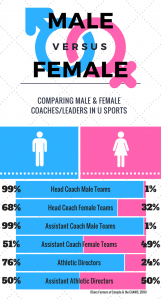 A 2013 report published by the Coaching Association of Canada (CAC), found that while there are almost as many teams in U Sports for women as there are for men, only 17 per cent of the athletic director positions in Canadian universities are held by women.

Sandmeyer-Graves says this is not a women’s issue, but a sport issue, and having gender diversity at all levels will create a stronger culture and stronger outcomes.

“Not only because women deserve it, and deserve to be able to access coaching opportunities just as much as men do, but also because it is a huge loss to the U Sports system not to have the talent and the contributions of women as coaches,” she said. “There’s a missed opportunity there for U Sports and for their athletes.”

Lisette Johnson-Stapley, the chief sport officer of U Sports, uses two words to describe the representation of female coaches at the university level: not common.

She says men play a crucial role in the conversation, needing to speak to the skills, leadership and abilities that women bring to the table.

According to Sandmeyer-Graves, a perfect example of someone who plays his part is Ryerson’s director of athletics, Ivan Joseph.

“It’s about having men who are prepared to take action within their sphere of influence, to open doors, to champion women, and to set out strategies to help women advance,” Sandmeyer-Graves said.

In 2015, the CAAWS, the CAC and U Sports discussed the status of women in coaching and planned an initiative with Ryerson University to give retired female athletes an opportunity to transition to permanent coaching positions.

A chosen mentor coach at Ryerson was required to complete the CAC’s one-day, intensive training module that prepared coaches to step into the mentor role with confidence and clear purpose. But the CAC’s leadership is adamant in calling for more.

In one sentence, Lorraine Lafrenière, the CEO of the CAC, summed up what U Sports needs for this conversation to continue and open up more opportunities for women.

“We need more people like Ivan Joseph,” she said.

Down at ice level, Joseph’s initiatives seem to be paying off.

“We didn’t look at it as, ‘let’s hire Kori so she’s the only female coach in men’s hockey’ — we had a really strong relationship with her and we knew the strengths she had, and that’s ultimately why we leaned towards her,” Duco said.

“But I do think the ripple effect of that is huge.”

FEATURE: What it’s like being a Ryerson student with a learning disability