This version adds quotes from Ryerson’s president, Mohamed Lachemi, and an infographic.

The program has seen steady growth over the past two years, so much so that it is now open seven days a week.

The hostel is geared towards commuter students at Ryerson, a demographic that has slowly grown over the years and earned the university a reputation for being a commuter school.

The program served more than 500 students this year, according to a tweet by Ian Crookshank, Ryerson’s director of housing and residence life. 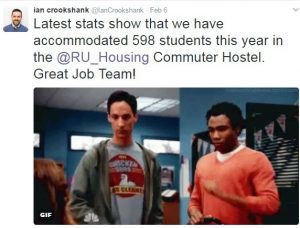 Ryerson’s commuter hostel program has seen more than 500 students this year, according to a tweet by Ian Crookshank.

The continued success of the program has come with minimal promotion though, says the university’s housing operations coordinator Valerie Bruce.

“We did not expect it to be as successful as it was,” she says.

The program allows students to book hotel-like rooms for under $50 a night at the International Living and Learning Centre (ILLC). Acting as short-term accommodations, the rooms help students manage their 8 a.m. classes and exams, or even attend late-night events on campus.

It’s this involvement in campus life that motivates Bruce, herself a Ryerson grad, to not only push for more exposure of the program, but pursue partnership opportunities to expand the initiative.

“Because of the success of last year and the ease of it being … a good machine that kept on running, we decided to open it up to all nights,” she says. Originally, the hostel was only open Sunday to Thursday to deter students from partying and using it for non-academic purposes over the weekend. But demand from both students and on-campus events led to the decision to open up the hostel seven days a week, one made earlier this year.

There are a number of advantages to the hostel when compared to a hotel. One is the lack of a security deposit. While there is undoubtedly a need to protect against property damage, this becomes an added cost for students — one they do not have to worry about at the commuter hostel.

Despite these benefits, Bruce told the Ryersonian in 2015 that the nine rooms offered in ILLC – which come complete with a double bed, bathroom and closet – may not be enough to accommodate the demand from students. This is a sentiment echoed by the university’s president, Mohamed Lachemi.

“We all know that we have demand for these spaces that far outpace our current supply,” he told the Ryersonian on March 20.

According to 2015 data from the university planning office at Ryerson, more than 45 per cent of the school’s undergrad students commuted from within the Greater Toronto

Lachemi also admits that the school’s prime location in the city’s downtown core plays a role, with it becoming more and more expensive to live there.

“We are also aware of the increasingly complicated and very complex housing market within the city of Toronto,” he said, “[but] the commuter hostel is actually a great example of innovation to support students who commute.”

According to data colleceted by the school’s university planning office in 2015, more than 45 per cent of undergraduates at Ryerson commuted from within the GTA.

To further support these students, Bruce previously mentioned the possibility of getting hotels in the area to agree to offer Ryerson students discounted rates, but admits the difficulty in making this a reality.

“Unfortunately I haven’t been able to confirm with hotels,” she laughs.

While partnering with nearby hotels is a work in progress for the housing administration, they have been proactive in connecting with Ryerson groups that could benefit from offering students short-term accommodations.

Bruce mentions campus-wide events, like the Long Night Against Procrastination, and conferences held through the Ted Rogers School of Management, as some of these partnerships.

“I think the biggest success for us – and it continues to be – is word-of-mouth [promotion], so exam times … are a big time for us.”

With under a month left until exams begin, Bruce encourages commuters to book rooms at the hostel in advance before they begin filling up.

We spoke with Ryerson students who have used the university’s commuter hostel since its unveiling two years ago. Here’s what they had to say about their experience:

“I feel like the fact that it’s branded with Ryerson is [a] value…because it gives me a sense of … safety.” 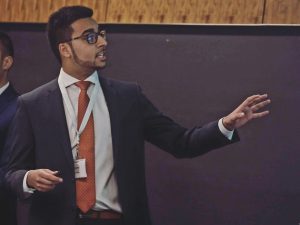 “An ironing board would be nice,” he laughs. “If you’re commuting, you have a pretty compact bag. For example, I had to wear a suit the next day and I needed to iron my dress shirt. So I had to pre-iron my shirt and take it on the TTC with me. It was pretty uncomfortable, so an iron would be greatly appreciated – or an ironing service. But I guess that wouldn’t apply to anybody outside of business.”

“[The] first time I used the hostel was two weekends ago – Feb. 25 and Feb. 26. I was doing a case competition … my friend went home and got like two, three hours of sleep. I got like six so it was advantageous in that sense.” 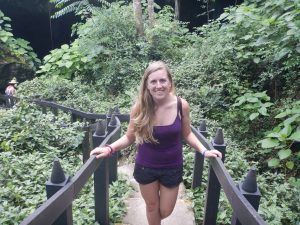 “It was very unknown when they first started it … [my friends] were kind of in the dark [when Ryerson] started a commuter hostel and wish they’d found out about it earlier.”

“My friends had to connect through an ethernet cord … I would use Wifi but I’d have to go down to the lounge area.”

“It’s kind of a hidden gem that Ryerson has.”

“Even though I was on campus, it was kind of like a mini-vacation at the same time, because it is set up as a hotel.”