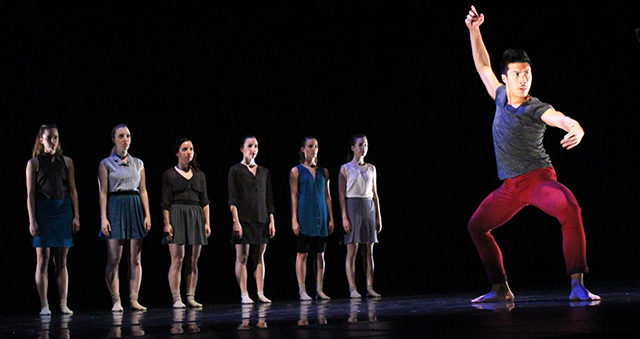 When tragedy strikes, sometimes it’s hard to find the light in all the darkness.

But choreographer Hanna Kiel has done just that. With the help of 19 Ryerson dance students she will be translating her personal experiences with death and illness into a contemporary dance piece, using movement and lights in place of words and pictures to tell her story.

Two years ago, Kiel’s father-in-law unexpectedly died. And last May, Kiel’s own father was diagnosed with stage-four colon cancer. In both situations, Kiel had to choreograph a new piece within weeks of hearing the news.

“It’s not easy to get back to my life and keep doing what I’m doing while at the same time carrying this heavy feeling in my chest,” said Kiel.

“The question came down to me; how do we face and embrace the present moment during the darkest moment in your life.”

The result was Into the Storm. It’s one of four choreographed pieces that Ryerson dance students will perform throughout Ryerson Dances 2014, a two-hour mixed program featuring mostly third- and fourth-year students who have been rehearsing since September. Kiel says she came up with the title because she sees the challenges in life like a storm.

“The point about the storm is it never lasts forever,” said Kiel. “That’s something I want audiences to see when they face tragedy. You can learn from it, you can become stronger, and you can maybe become more prepared for the next storm.”

Fourth-year dancer Sarah MacDonald is one of the 19 students who will try to bring Kiel’s vision to the stage during six different Ryerson Dances performances from Nov. 11 to 15.

MacDonald says there’s pressure to take a story so personal to a choreographer and translate it into something that works on stage.

But she says Kiel has been patient and understanding with the dance students, allowing them to take her story and make it accessible to audiences through their own movements, styles and interpretation.

“I think (Kiel’s piece) comes from a much more vulnerable place,” said MacDonald.

MacDonald is one of the few dancers who will be performing in two of the pieces put on as part of Ryerson Dances.

“I think she tried to bring in this really New York City scene and set,” said MacDonald. 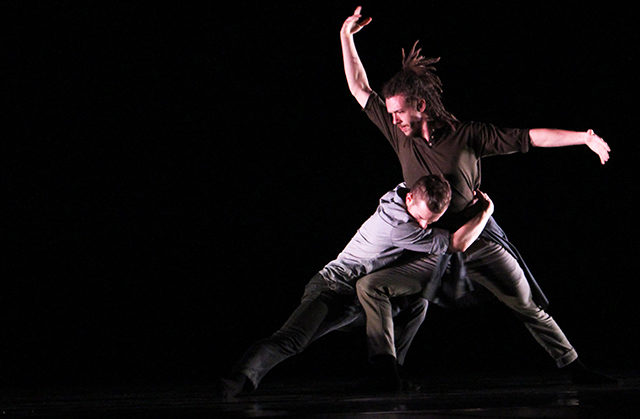 Into the Storm is one of four choreographed pieces that Ryerson dance students will perform throughout Ryerson Dances 2014. (Alexis Allison / Ryersonian Staff)

“And so the dancers who come in, I feel like they’re very distinct characters of New York. I’m hoping that when the lights go up it looks like New York City at that time.”

It’s that look and feel that part-time Ryerson instructor Jennifer Triemstra-Johnston has been trying to create with the help of Ryerson production students.

According to Triemstra-Johnston, New York City art in the late ’50s and early ’60s was characterized by a form of sculpture called assemblage, where different pieces of scrap metal and junk were put together to create a finished sculptural form.

“So we decided to go to a junkyard and find as many pieces of street metal work that we could find,” she said.

“And we created this pile of street junk that kind of hid the risers that (St Denys) wanted. It’s a set, but it’s a piece of sculpture as well.”

Fourth-year dancer Josh Doig has had St Denys as a professor since his first year at Ryerson and he was ecstatic to be chosen as a part of her piece. He said St Denys’s jazz is different from any other form of competition jazz he’s danced before.

“It’s older, it’s dirtier, it’s less superficial than studio jazz,” said Doig. “It’s all about your own movement and style. (St Denys) has said, ‘I don’t want to clean this like crazy because I don’t want to lose the organic-ness of it.’”

Although St Denys’s set may be the most complicated to create, each choreographer worked with the set design and costume team to create a specific look and feel. Shifting Silence, a technical contemporary ballet piece choreographed by Robert Glumbek, will be set on a completely black stage, letting the lighting create the mood rather than an elaborate set.

Rounding out the evening is Kate Hilliard’s contemporary piece, Dark Matters for a Spotless Soul which may be the most futuristic of the evening. Her dancers will perform while a series of projections are displayed across the set and the dancers’ bodies.

No matter what piece they are involved in, Doig and MacDonald say they are excited to showcase the months of preparation and practice that went into perfecting the performance.

“I think it’s important for Ryerson to know what the theatre school is and how hard we work here,” said Doig. “We are the fourth-year dancers, we need to show the audience what the past four years have taught us.”

MacDonald agreed, noting this performance is much more than audiences would get from an episode of the television series So You Think You Can Dance.

“It’s live, it’s in front of you, it’s not on a television screen. It’s so much more visceral and exciting,” said MacDonald. “And the technique, we have incredible faculty that have prepared us for however many years, whatever year you’re in. Nothing quite compares to it.”

Sixty-three dancers will take the stage over the course of the two-hour program.

Ryerson Dances 2014 runs one show a day from Nov. 11-15 in the evenings, and will also be presenting a matinee show on Nov. 15. Tickets are available through the Ryerson Theatre School box office. 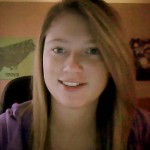 My two cents for Poloz, ’cause that’s all I have