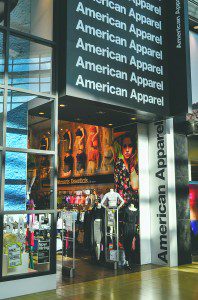 Ryerson has a new clothing supplier for its branded merchandise. The change comes after at least two years of working with supplier American Apparel, which some faculty members took issue with over what they said are sexist advertising policies.

In past years, university faculty and staff have worn Ryerson-branded American Apparel T-shirts at the annual Ontario Universities Fair (OUF). In a change, the school went with Los Angeles-based company Bella+Canvas for this year’s event. The Bella+Canvas website promotes the company’s commitment to “sustainability” and “no sweatshops.”

Marisa Modeski, the assistant director of student recruitment in the office of undergraduate admissions and recruitment, said “feedback from previous years” factored into the decision to switch, along with considerations about price, fabric and durability. Modeski’s office collaborated with Ryerson’s marketing department to make the decision about a new supplier.

The Ontario Universities Fair (OUF) was held Sept. 23 to 25 this year at the Metro Toronto Convention Centre. The event is an important recruitment opportunity for Ryerson, drawing thousands of high school students seeking information on university programs in Ontario.

Modeski said more than 132,000 people came to this year’s fair over its three-day run.

Joyce Smith, an associate professor from Ryerson’s school of journalism, complained about Ryerson’s use of American Apparel for university-branded shirts two years in a row. Last year, she sent an email to the FCAD faculty listserv, and more faculty members, coming to a total of at least 18, joined the call to stop doing business with the clothing company.

Smith said the “most egregious” problem with using the company for Ryerson-branded merchandise is what she views as the sexualization of young women in American Apparel ads. Ryerson’s association with the company, she said, was particularly inappropriate at the OUF.

“Of all the companies we could support with our dollars, American Apparel was not the one, based on their marketing and advertising strategies,” she said.

“Everything seems antithetical to the idea of recruiting young people, especially young women, to university education.” 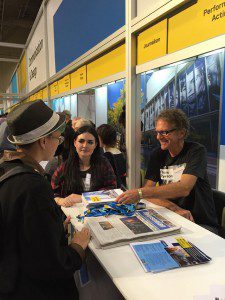 Smith said only Seoun Outh, manager of student recruitment, responded to her concerns last year. No one else had discussed the issue with her since, and she was unaware that a new provider had been chosen this year. However, she said she was “delighted” about the change.

According to Ryerson spokesperson Michael Forbes, the school conducts annual vendor reviews, and the decision to go with Bella+Canvas among several other suppliers was based on “price, fit and feel.” He also said Ryerson did its own design and production this year, while American Apparel took care of the production last year.

Ryerson’s purchasing policy states any goods purchased “will comply with the requirements of all government policies,” including the Accessibility for Ontarians with Disabilities Act. The policy does not mention other specific ethical standards to which suppliers should adhere, but mentions that suppliers “may be required to demonstrate sustainable application of the three R’s – reduce, reuse recycle in competitive bids.”