Linh Nguyen has tattoos, piercings and is only 27, but the fourth-year Ryerson economics student wants to be Mississauga’s next member of Parliament.

Nguyen is the Green party’s MP candidate for the Mississauga East-Cooksville riding for October’s federal election.
If elected, she says she hopes to keep a very grassroots, community-driven voice in politics.

Linh Nguyen says she was impressed with student engagement during the RSU election and hopes that it will carry on to October’s federal election. (Courtesy Deepika Shewaramani/Ryersonian Staff)

“It’s so important for me to keep, at my core, the voice of students, the voice of youth and individuals that don’t have a voice.”

Nguyen ran as a last-minute candidate in the provincial election last summer, when the leader of the provincial party, Mike Schreiner, asked her to step in after a candidate in her home riding dropped out. She pulled in about four per cent of the area’s votes.

It all began, she says, when she was a summer student at the Ministry of Energy and a research intern with the Centre for Urban Energy at Ryerson.

“I knew that wasn’t fulfilling enough for me,” she says. “I wanted to experience what civic engagement meant from a very grassroots level.”

In 2011, she completed a degree in sustainability management – her first at Ryerson – and joined the Green Party as an intern. Today, she’s one of the provincial party’s deputy leaders, which means she sometimes steps in as the face of the organization.

She says being much younger than most of her colleagues can be both an advantage and a disadvantage. She often gets comments on how she’s too inexperienced to represent a riding of 30,000 people. But she thinks her age brings a fresh perspective to what she says is a fundamentally broken system.

“In politics, we always talk about youth apathy and low voter turnout for our generation, but it’s because we’re not being given choices that resonate with us,” Nguyen says.

“But it’s our needs, our wants, our future.”

Developing the party’s youth engagement strategy is also a large part of her role. She says she knows exactly what it’s like to feel disengaged with the government.

She recently formed a roster of youth political advisers, including students Cormac McGee and Jessica Machado. Both students won a position on Ryerson’s Board of Governors last week. Machado will also be the Faculty of Science’s senator, while McGee, part of the Transform RU slate, will be on the Ryerson Students’ Union (RSU) next year.

“I was so impressed with the level of student engagement in the RSU election,” says Nguyen. “The way they kept the excitement, the energy, is something I hope we can carry into the federal election.”

Nguyen is involved in her party on both a federal and provincial level. Last month, she was appointed the youth critic for the Green Party of Canada, which means when policies relating to youth come out, she will be an official commentator.

“I don’t label myself as an activist, but everything I do is very community driven,” she says.

Above all, when she begins campaigning, she wants to break the stereotype that youth don’t care.

“We do care,” she says. “We are the next generation of politicians.” 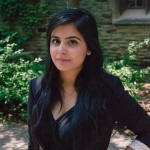