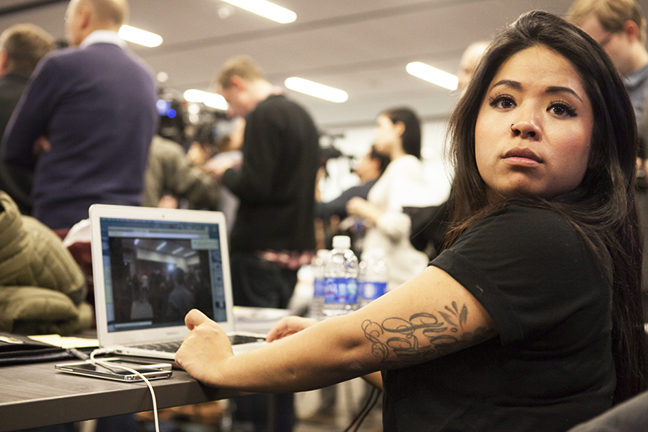 Linh Nguyen, an economics student at Ryerson, has taken on the role of deputy politics/digital director of Bernie Sanders’s Illinois primary race just months after moving to the U.S. to work on the presidential hopeful’s campaign team.

Sanders has gone from being a relatively unknown politician to stirring up what Nguyen calls a “political revolution.” His democratic socialist policies have resonated with young voters across the U.S. Sanders is in favour of a single-payer health-care system and campaign finance reform.

With the Iowa caucus now over and Sanders’s win in the New Hampshire primary, Nguyen has been sent to Chicago, to run the political and digital campaign in the State. The Ryersonian caught up with her on the campaign trail to talk about the power of the millennial vote, Sanders’s sense of humour and the lessons she will bring back to Canada.

What is the best part of your job?

So hard to narrow it down. It really is being able to contribute to what we know will be a political revolution. I think, as someone who has an outside perspective looking in, Bernie Sanders is a politician who you may see once in a lifetime. He has been fighting for civil liberties, equal rights, and the 99 per cent for over 30 years and now it is our time to stand up for (with) him. That’s what excites me the most, by being part of the campaign, I’m able to contribute to a campaign that will change everything. We talk such a big game about living in a global community but I think with Bernie Sanders as the next US President, this is a game changer.

What has been the most exciting moment of the campaign trail so far for you?

On caucus night in Iowa I was put in the hotline room (where votes can call in and find out information about locations and times of the caucus meetings). The room was up with about 20 phones. Between 7:30 p.m. until 10 p.m. we switched roles and started receiving numbers as (votes were counted). We were locked in this room for an intense three hours straight with phones going off every minute with results and the moment when I realized that this was happening was the first phone call we got with results. Watching those numbers role in… I can’t even articulate it in words. It just felt like yeah, we’re here for a reason. We’re going to show the rest of country that Bernie is very much a viable candidate.

As a young politician yourself, what has been the most important lesson you’ll bring back to Canada with you?

That was one of the main reasons I wanted to do this, to understand best practices and the kind of shared learning we can bring back to Canada. We have faced the same problems here in that we have a number of demographics that are disenchanted with the system, that are tired of the career politicians that will only pay attention when there is an election cycle. It is the years in between when everyone goes silent essentially. These issues run very much parallel to what we saw in Canada. Why we strong such a strong desire to elect a Liberal majority. So for me, the big thing I want to bring back, is (the question of) how do we redefine youth engagement? What I find so fascinating is that for someone like Bernie Sanders, who really captured the youth voters in Iowa far greater than Clinton did, is that he is a 74 year old white male. You know what I mean? 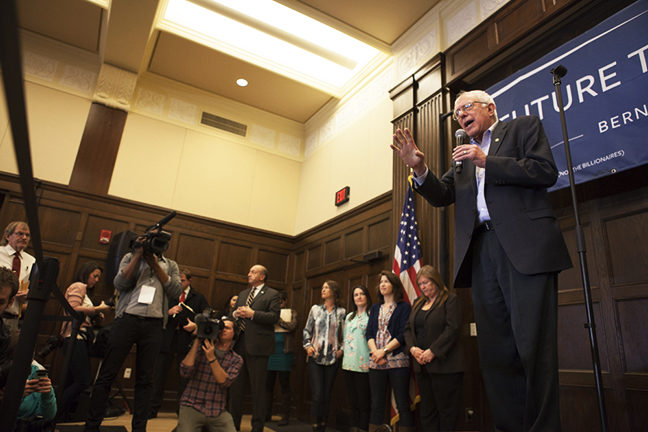 And yet everything that he’s saying just resonates so deeply with this younger generation. You gotta ask yourself, why is this happening? That was something I started to realize back in October before our election that it is not that we need more younger candidates, we had a number of young candidates that were running in the election. It’s finding the right people who know how to champion our voice.

Who know how to champion our issues, who know how to speak our language and understand that we’re learning, we’re evolving, we’re connecting in different ways. And if we can have more politicians being more responsive to our needs, thats when we start to see things changing.

Sanders’ has rallied young democratic voters in Iowa and now New Hampshire. Do you think this engagement will rub off on Canadian youth?

I truly believe so. Honestly, I think it is perfect timing…I think with our generation in particular–with social media and us being so hyper connected–we are able to stay so plugged in with what is happening south of us. We’ve become so much more cognizant of what’s happening around us, not just locally but globally. We understand that the next U.S president is absolutely going to be shaping our future… People don’t give us, the millennial generation, the kind of credit we deserve. We are starting to prove them wrong.

I think we are starting to see the ripple effect of that in multiple ways. We’re seeing more people on university campus’ going to rallies and coming out in full force.

That was something I noticed during the Canadian election and what I am noticing here. Our sense of civic duty is so different from older generations. We don’t simply see it as just casting our ballot or showing up to caucus. It’s that everyday activism, whether it is participating in a rally or ethical purchasing or sharing a petition on social media. We’re engaging in different ways. That’s how we stay politically plugged in. We developed a number of different platforms to do it, other than voting.

Have you noticed parallels between Trudeau’s past campaign and Bernie’s ongoing one?

Both have been critical in highlighting the needs for real change and raising bigger questions and answers for civil liberties and social/economic injustices. They’re humanizing this process by bringing the power and platform back to the people. When people (or voters) feel empowered to participate and make change, that’s how a political revolution starts.

There is no filter. He is so humble. There are times when it is hard to get him out of a room because he will literally want to shake everyone’s hands. He radiates this kind of energy, I don’t know what it is, but everyone is so drawn to him…and he’s funny.

He made a SNL appearance on Saturday night.