The Ryerson Rams women’s volleyball team emerged victorious in straight sets (25-23, 26-24, 25-20) over the Guelph Gryphons to earn a berth in the OUA semifinal. 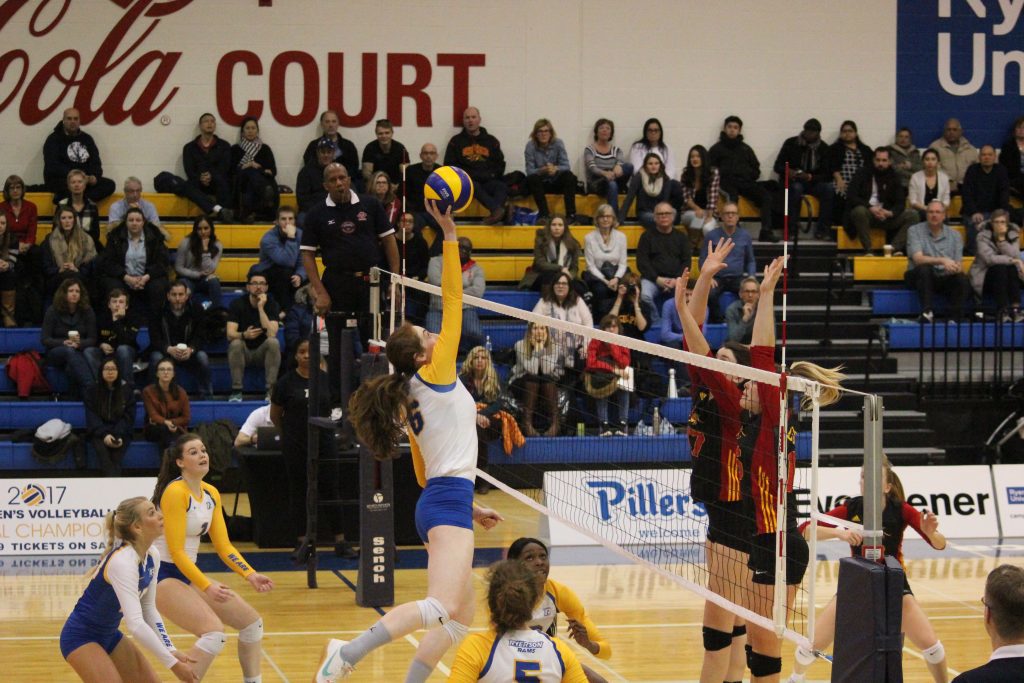 Rams’ outside hitter Veronica Livingston had a team-high 15 kills in a quarter-final win over Guelph. (Christopher Blanchette/Ryersonian Staff)

Veronica Livingston’s team-high 15 kills on 27 attempts spearheaded an impressive attack for the Rams, while libero Julie Longman held the back line with 23 digs in the match.

Despite the straight-sets win, Guelph proved to be a tough test. After a 25-23 opening set win, Ryerson found itself trailing 18-17 late in the second. But as they would prove to do all game, the Rams mounted a comeback and stole the set late to win 26-24.

For head coach Dustin Reid, it is making plays in these moments that will propel the Rams past opponents. And if they are to return to the OUA championship for the second year in a row, these crucial moments will only become more frequent.

“We’re going to be playing some top-flight competition, the toughest in our conference. Some nationally ranked teams. We need to go on the court and be assertive and not worry about the bad things, especially in our serve, receive and attack,” said Reid. “I think that’s the sign of a mature team,” he added.

While their close victory over against Guelph proved that they are a mature team, it also proved that the Rams are a team with a well-balanced attack too. Of the Rams’ 47 kills in the match, four players had at least seven. Reid attributes this to setter Kate McIlmoyle’s ability to facilitate and find ways to get players like Cailin Wark, who had 10 kills, more involved in the game.

While the Rams offence soared, it was the senior Longman who provided a defensive boost with 23 of the team’s 61 digs. Longman led the Rams in digs this year with 241 and is proving that fans should expect more of the same as playoffs unfold.

It is going to take the strong play and leadership of both Longman and Livingston for the Rams to make back-to-back appearances in the OUA championship. Their journey back continues as they will battle the McMaster Marauders in the OUA semifinal at the University of Toronto on March 10.