It’s 7 a.m. on a cold November morning at a farm near Guelph, and the Ryerson University Equestrian Club is ready to compete in its third intercollegiate horse show of the year.

The team placed in the top eight in all of the divisions at the show, accumulating a total of nine ribbons as a team. This included an individual reserve champion ribbon in the open 3’ division.

The Ontario Collegiate Equestrian Association (OCEA) horse show was hosted by the University of Guelph at Old Orchard Farm on Nov. 26.

The horse show format is not like what you see at the Olympics.  Riders are not on their own horses but instead they are catch riding a horse they’ve never sat on before.

Horses are assigned randomly to riders and are provided by the host farm and team. 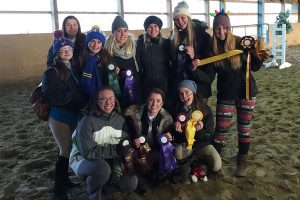 The Ryerson University Equestrian Club with their ribbons from the Nov. 26 show. (Courtesy of Katie Wilson)

The Ryerson team consists of 11 riders, including team captain Katie Wilson. For her, the best part of the OCEA shows is experiencing new horses and being able to test her riding skills on different mounts.

“It’s really luck of the draw and then you have to trust your instincts. At first, catch riding was hard but you kind of forget about the horse and have to ride how you know,” Wilson said.

The horses are warmed up by approved warm-up riders. During this time, riders can watch the horses. After that, they mount and are sent into the ring to jump their course.

Each round, in each division, is judged on the rider, not the horse. This is better known to people in the horse world as equitation. A solid position over and between the jumps and effectiveness of aids are key to placing in the top eight.

In Sunday’s course, the rider had to get the horse to the correct takeoff spot for the jump, demonstrate a halt, the correct number of strides in the lines as well as a trot jump.

Following the jumping phase there is a flat phase where riders do not jump. Instead they demonstrate walk, trot, canter and other tests such as extended or collected trot and riding without stirrups.

The equestrian team provides a unique opportunity to ride for a team. The only other time riders compete in a team setting is at the top level of the sport, a Nation’s Cup, where riders represent their country.

For each ribbon won at OCEA shows, the rider accumulates individual points, which count toward a team score. At each show, and at the end of the year, there is a high-point team. 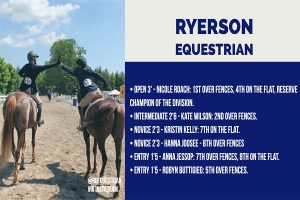 “It’s really about the team atmosphere and supporting everybody. It’s not about the points or needing to win. It’s more about fun vibes, having a good time and improving yourself over the season,” Wilson said.

Lucy Gilbert, Ryerson equestrian team member and president of the OCEA, said that her favourite part of the team is all the friends that she made.

“I wouldn’t be doing this if it wasn’t for the people,” said Gilbert.

“When I first started university, I didn’t have a lot of friends, but then I joined the team and I loved school and made so many friends.”

Gilbert said Ryerson’s equestrian team has a history of being very spirited, as it was once one of the smallest teams.

Michelle Monkhouse, a former Ryerson student who died in a car crash driving to ride her horse, was a member of the Ryerson equestrian team.

“She was very spirited and we have a year-end award for her, the Michelle Monkhouse Award, to honour her as a previous Ryerson student. It’s an award for sportsmanship and spirit,” Gilbert said.

The Ryerson team practises at Pause Awhile Equestrian Centre in Stouffville and carpools together to take lessons there once every two weeks.

Ryerson alumni can continue to ride for the team for three years after they graduate.

In order to be on the team, everyone must pay a fee at the start of the season and be members of the Ontario Equestrian Federation. The entry fee for each individual rider for one show is $55. The revenue from the show fees are split between the host school and the OCEA.

The Ryerson equestrian team is part of the Central Zone of the OCEA. The teams they compete against in their zone are the University of Guelph, University of Toronto, Laurentian University, Georgian College, Lakehead University and York University.

The Ryerson equestrian team is halfway through its competitive season and will compete again Jan. 14 at Pause Awhile Equestrian Centre.

Congratulations to the Ryerson Equestrian Team – great to read about such positive team spirit and hard work – all happening on top of university level academics. Cheers to all of you.
Catherine van Nostrand