Growing interest in men’s and  women’s curling at Ryerson has paved the way for the program’s first development squad.

Head coach Perry Marshall said that having an established program and presence in the Ryerson athletic department brings community awareness to the sport. With a program, aspiring curlers can see if their competitive dreams can be realized, Marshall said. 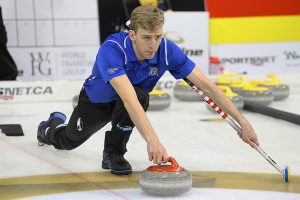 Jake Thielen, a development curling team player, slides out of the hack at the Mattamy Athletic Centre at the Ryerson Rams Challenge Cup, Apr. 15. (Photo by Alex D’Addese)

Last season was the first year the program was able to put together a team for both genders in order to meet part of Ryerson Athletics’ program guidelines. The development team consists of three males and one female curler.

After this year’s turnout, the goal is to implement development teams for both genders.

“Tryouts and information sessions this year have been well attended, and essentially what this did was create an opportunity to build a development program and create a feeder or funnel system, and an opportunity for players to get better and be on par with a path similar to someone who has a competitive athlete’s pedigree,” Marshall said.

“I was really happy to add the third team or third dimension to the program.”

The new development team plays in an open competitive league at the Toronto Cricket Skating and Curling Club every Tuesday night.

“My first experience with the team was a lot of fun. I think we played really well,” said first-year curler, Joshua Mancinelli. “Overall, it was a great learning experience and I hope we can keep getting better and better as the season goes on.”

The makeup of the development team mirrors the first team. That way, if needed, a development player can be put in a like role in the varsity situation.

Third-year curler Jacob Thielen has been part of the team as a development player since the program started three years ago. More than anything, he says “building a good team environment” is what’s most important.

“My overall goal is to develop and build a team community. I’m a big believer in building a good team environment, being a part of the team and maintaining it as well,” Thielen said.

Currently four players have been named to the men’s varsity team with the three remaining curlers being left on the development team. Eventually one of them will be selected as the fifth reserve player for the main team.

“It brings more intensity but also we are all still pulling for each other,” Mancinelli said. “We’re not wishing anything bad upon each other, ultimately we want the best team out there. We are all in it for the long hall and trying to improve the program overall.” 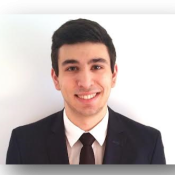