Ryerson falls behind on accessibility

Lara Wong is a first-year student at Ryerson. She relies on a walker to get around campus. She lives in a Pitman Hall room renovated for her needs, including a roll-in shower. Wong has carefully planned her route to classes based on accessibility and spent much of her first week on campus mapping it out with her support worker.

She has to take different routes than her fellow able-bodied classmates and can’t rely on other people’s directions to send her to appropriate entrances. 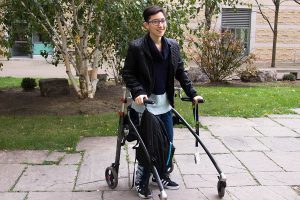 Lara Wong uses a walker to get around campus, often going out of her way to get to accessible entrances. (Photo by Brooke Taylor)

“Trying to remember all of the little things and how to get there is really difficult,” she said. “They’re so different from how other people would get there.”

Ryerson has recently been criticized for missing the mark on accessibility, especially with the Student Learning Centre (SLC). Accessibility for Ontarians with Disabilities Act (AODA) chair, David Lepofsky, said the centre has major accessibility problems in a video posted on the AODA alliance YouTube page on Oct. 29.

For people with physical disabilities, it remains an obstacle because of its hidden accessible entrances, plethora of stairs, random pillars, glass walls and revolving doors. The apparent lack of accessibility at the SLC is especially surprising given that the building is only three years old, a relatively modern addition to the campus.

Wong’s support workers, hired by Wong and funded through Direct Funding, help her throughout the day and occasionally tag along to get her to classes. Direct Funding is a program that provides financial backing to people with physical disabilities, which allows them to hire their own support workers without the need of an agency.

“Sometimes I still rely on [my support worker] to get me to classes because a lot of the doors are closed and I can’t open the door by myself if there’s no one else in the classroom,” Wong said.

Contrary to Lepofsky, Wong views the SLC as one of the most accessible buildings because of its different points of access.

“There are so many ways to get in other than the front entrance,” she said.

She can get inside by going through the Rogers Communications Centre (RCC) to Kerr Hall, to the POD and through the library. She also enjoys going up the zigzagging ramp out the front.

As for the rest of the buildings on campus, “I wouldn’t say they’re not accessible but some buildings are harder than others,” Wong added.

Kerr Hall is pretty inaccessible for Wong, but she said that she likes being able to use the bridge to and from the RCC to get back to her room in Pitman Hall.

“I think the most inaccessible building is Jorgenson Hall, coming through the main entrance at least,” she said. “I can’t get in that building, even though there is a ramp with a sign on it.” 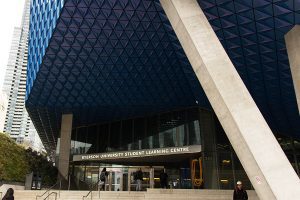 The SLC’s main entrance is barely accessible, with a tucked away ramp and elevator. (Photo by Brooke Taylor)

Even to get to Oakham Café, she has to go through the Student Campus Centre building and use its elevator as the Oakham building elevator requires a key from the front desk.

When it came to choosing Ryerson, it wasn’t just about the quality of its social work program, but also the accessibility of the campus.

“I always have to think about both. The program at Ryerson is really well-known, and then I heard that [the campus] was more accessible than other universities,” Wong said.

“She shouldn’t have to. She was included in all these conversations with the facilities and the facilitators so she knows the lack of progress with the issue,” Wong said.

While the Architecture Building may have a table for her to sit, it doesn’t have bathrooms that are accessible for Wong.

“It’s so close to Pitman that I just go back,” she said.

Wong said she was surprised to find that the test centre in the Victoria Building, where many physically disabled students write tests, is quite inaccessible.

“It’s in the basement and the main elevators in the Victoria Building don’t go to the basement,” she said.

There’s an elevator tucked in a corner of the building that requires a code, and the user has to hold the button to make it descend. It only goes to the basement.

Another one of Wong’s main issues is the lack of directional signs available, not just to accessible areas, but to all those around campus. It’s important to recognize that even if something is accessible, it may not be accessible to everyone, she added.

Stephen Trumper, a contract professor and wheelchair user at the university, agrees with Wong.

Trumper is mainly based out of the RCC, which he said isn’t so bad. The RCC offers door-openers, an elevator and a well-equipped bathroom.

“I wouldn’t say the same of other buildings,” he added.

While he mostly avoids Jorgenson and the library because he finds it ugly and doesn’t need to go there, he said their ramps are complicated and added as an afterthought.

As for the SLC building, he thinks it’s great for Ryerson’s able-bodied students and gives Ryerson a presence on Yonge Street, but misses the mark for mobility-challenged students. 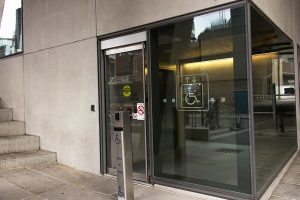 The elevator, tucked along the side of the SLC looks like it requires key access to use. (Photo by Brooke Taylor)

“It’s tacked on, and what does that say to students or teachers who have disabilities?” Trumper said. “It says ‘well, you know, we’ll try to make it work for you but we don’t really care that much,’ is what I think it says.”

As for how Ryerson can become more accessible? The answer isn’t simple.

“You have to do an audit. You have to look at everywhere,” he said. “If you’re not conversant in disability speak and actions, you’re just not going to think about that.”

For example, the RCC building’s main entrance has a bit of a slope that can become covered in snow and ice during the winter. As a result, it becomes a safety hazard to those in wheelchairs.

It’s also not easy to accommodate every individual’s needs and some responsibility will rest on the individual’s shoulders, Trumper added. But making it look good can be welcoming to students with disabilities.

“There are ways that [Ryerson] can do it better and make it look better,” he said. “The esthetics are just as important as the access, I think.”

While he doesn’t believe signage is the solution to the problem, he’s consulted on signage before and thinks there are artful ways to do it.

“You can really see that you can do a lot more than Ryerson does,” he said.

So, while the SLC might not be the most accessible building, it doesn’t seem like it’s the worst on campus.

And for those who use power wheelchairs, Trumper has a tip for you: “the zigzag wheelchair ramp down the side, it’s kind of a great place to have fun to go down.”

RGSU Referendum: What’s at Stake and How to...