Ryerson fashion school named among top in the world

Ryerson’s fashion school ranks as one of the top 50 fashion schools in the world, according to Fashionista, a popular independent U.S. website.

“We deserve to be in the ranking,” says Robert Ott, chair of the school. However, he knows its limitations because it’s “unscientific and based on anecdotal facts.”

Ryerson placed 27th on the list, which was released last month and shared on Twitter to Fashionista’s almost 1.4 million followers. Taking the top spot is Central Saint Martins in London, followed by the London College of Fashion. In third is Parsons The New School for Design in New York City.

Other Canadian schools made the cut as well. 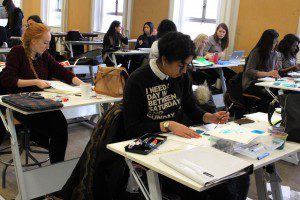 First-year fashion students on assignment in Fundamentals of Design and Colour class.

The site started its international rankings in 2010. Each year, its staff refines the criteria of what makes a school stand out, and surveys over 3,000 readers for their experiences at the institutions.

Criteria considered to determine the latest rankings included annual tuition, student and alumni feedback, and factors such as “quality of the faculty, the practical and business training offered, social life and financial aid options,” according to Fashionista’s website.

They also consider the success of graduates like Ryerson’s Jeremy Laing. Laing launched his own brand in 2005, which last showed at the Fall 2014 Mercedes-Benz Fashion Week in New York.

Ott says he believes the rankings are also influenced by the location of the school.

“If Ryerson was located in London, I believe we would be higher in the rankings,” he said. “If you took schools from there, along with Milan and New York, out of the ranking, we rest at a very interesting place.”

During its few years of existence, Fashionista’s list has gained substantial recognition. Maclean’s magazine and The Huffington Post wrote about the list on their sites in 2013.

Stephanie Rotz, undergraduate marketing co-ordinator, says that Ryerson’s school of fashion has made significant progress. She says the increased use of social media has benefited the program since she graduated from the school last June.

“Everything that we are putting out there, (from blog posts to daily tweets), is being noticed in a positive way,” she says.

Ryerson fell one spot from the 2013 list, where it landed in 26th place. 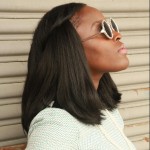