A Ryerson alumnus criticized the university’s president, Mohamed Lachemi, in a letter on Friday for having film students remove the Ryerson logo from their short documentary about Niagara Falls’s economic issues a week ago.

The alumnus who wrote the letter, Andrew Munger, is a graduate of the film studies class of 1990.

In the letter, which was sent to the Ryersonian via email, Munger said he was “deeply disturbed” by Lachemi’s actions and added that the president “[displayed] a fundamental misunderstanding of the role of media, journalism, filmmaking and academia.”

Story continues below the image. 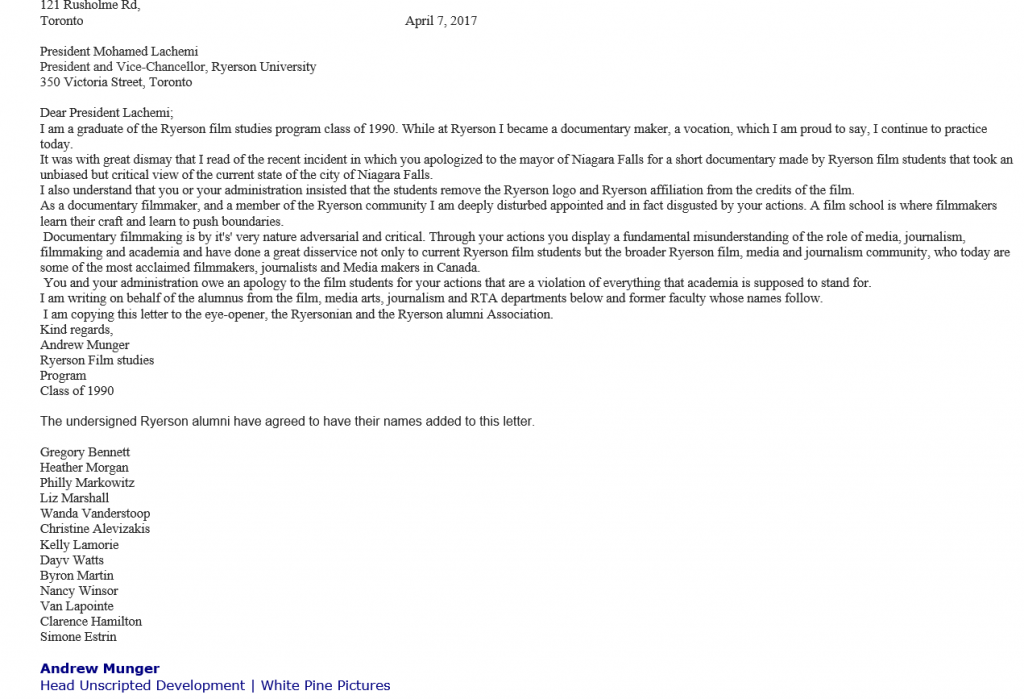 He also disapproved of Lachemi’s apology to Niagara Falls mayor Jim Diodati, writing that he was dismayed at Lachemi’s reaction to their “unbiased but critical view.”

Munger is also the head of factual entertainment development for White Pine Pictures, and is the producer and director of award-winning films, including Walmart Nation and Campaign.

Lachemi responded to Munger’s letter in an email Monday, writing that he stood by the students’s work, but also stood by his position on asking them to remove the logo, insisting that they “follow proper usage guidelines in the future.”

He added that he, “made a point of meeting with Image Arts students and faculty to reiterate [his] support for their work and to reassure them that they have the support of [his] office and the entire Ryerson community.”

The film, titled As Niagara Falls, is just under five minutes long, as per the parameters of the assignment it was produced for. It examines the areas of Niagara Falls outside of the tourist core that appear to be neglected. Unnamed voices in the background blame the mayor and the city.

In an interview with the Ryersonian, one of the filmmakers, Justin Diezmo, said that their sources were willing to have their identity used for the project, but that they chose not to use any names in the piece because they wanted to apply them to a follow up project outside of class that goes into more depth on the issue.

“We didn’t want the people in the video to be … written about by what the politician wants,” he said.

The letter was signed by 13 other individuals that Munger said are notable alumni and past faculty in FCAD departments.

Enactus Ryerson is changing the world one competition at a time