Munira Abukar says she has what it takes to beat Rob Ford.

The 22-year-old Ryerson grad is running against the mayor – in the heart of Ford Nation. She’s seeking the seat in Ward 2, Etobicoke North in the Oct. 27 election.

Over the last year, Abukar says she grew frustrated with municipal politics. The circus at City Hall stole attention from the issues at hand, which Abukar viewed as a gross injustice to the people of Toronto.

“If you see an injustice, it becomes your responsibility,” she says.

Abukar was born in Etobicoke to Somali parents who immigrated there more than 25 years ago. She earned a degree in criminology at Ryerson and it was during her studies that such questions of injustice were brought to the forefront of her consciousness.

Abukar says she felt compelled to take a stand on behalf of her community.

“When I looked at city council, I felt that not one person in that chamber represented my ideas or represented Toronto as a diverse city,” she says. “Toronto’s mantra is: ‘diversity is our strength.’ When you look at politics, you don’t see that reflected.”

Beyond representing the diverse voices of her community, transportation and unemployment are key features of Abukar’s platform.

The city forgets about Etobicoke in most transit debates, she says.

“They’re talking about LRTs and subways, but what about us?”

Commuting to and from Ryerson for four years, Abukar says she often waited more than 40 minutes for a bus. Abukar wants improved bus services from Etobicoke to downtown Toronto, and a more affordable metropass for students.

To address unemployment, Abukar says she wants to create incentives for industries operating in Etobicoke to hire workers, especially younger ones who live in the area.

While some of her fellow candidates place emphasis on social media to get the word out, Abukar said she prefers going door to door to hear the concerns of her neighbours in person.

She may be young, but Abukar says her volunteer experience in the community gives her a competitive edge. She organized food banks and served as director of the board and vice-chair of resident & community services in Toronto Community Housing.

In 2011, Chatelaine magazine listed Abukar as one of Canada’s Top Women under 30.

Still, Abukar is an underdog in the race for Ward 2.

“Regardless of the results on Oct. 27, on Oct. 28 I will be up at the same time in the morning doing the same thing that I’ve been doing for the last nine years.” 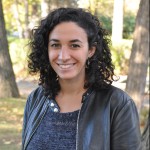 Emanuela Orsini was the Broadcast Managing Editor of the Ryersonian. She loves languages, travel and food.

Emanuela completed her Masters of Journalism at Ryerson University in 2015.

Emanuela Orsini was the Broadcast Managing Editor of the Ryersonian. She loves languages, travel and food. Emanuela completed her Masters of Journalism at Ryerson University in 2015.