This version includes corrections to the credits of both photos.

Rebeca Ortiz has always felt a connection to her Chilean grandmother. But typical antique stories and emotive conversations one might have with a grandparent were not to thank for that. In fact, verbal communication between the two was impossible until just recently.

Her grandmother’s native tongue is Spanish – a language she was not at all familiar with until a few university classes helped her learn it. This total disconnection of language and connection through other means is exactly what Ortiz had in mind when she began working on her upcoming short film, Abuela, named after the Spanish word for “grandmother.” 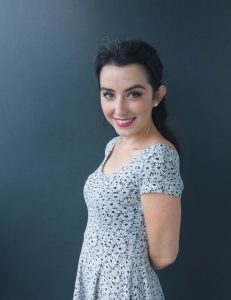 So, this is how the story goes: an eight-year-old girl named Kathy gets a visit from her Spanish-speaking abuela for the very first time. Since Kathy only understands English, they’re forced to find a connection somehow and build a relationship without relying on speaking. There are obviously some miscommunications throughout the day, but they work through it. The movie has a happy ending with the two finally connecting by making empanadas, a traditional Chilean food.

Abuela came to life after director Ortiz and Alicia Harris, who will be producing the film, saw a deadline for a pitch competition coming up in two weeks. Though it was hectic, Ortiz and Harris were confident in their idea and were able to pull it together by deadline.

Managed by Women in Film & Television Toronto (WIFT-T), the competition asked women to pitch their short narrative films for a chance to win $50,000 to fund their project. Ortiz and Harris made it to the finals as the youngest people pitching their stories. Amidst some filmmakers who have previously been nominated for Canadian Screen Awards or Emmy Awards, they confidently stood on stage to sell their story on March 30.

Although Abeula didn’t win the $50,000, the film came in second place with an honourable mention on WIFT-T’s website, and the girls took home a pair of programming passes valued at $500 each.

If Ortiz had received the funding, the movie would be ready in the next four months with an opportunity for her to pay the cast. Instead, she’s now on a journey to find funding elsewhere with a wait of up to eight months. But no matter what, she vows that Abuela will be made.

It was only recently that the Ryerson film studies graduate began broadening her identity as a Latina in addition to being white. This is also the first time she’s integrating her own culture into a film.

“I never really considered myself Latina because I look white,” said Ortiz . “No one looks at me and sees that. I’m not a visual minority at all.” 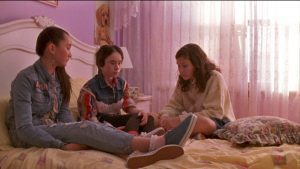 A still from one of Ortiz’s films titled ‘Love Stinks.’ (Courtesy Dan White)

Under-representation and misrepresentation of minority groups in films is particularly what Ortiz wants to focus on next. Especially with Latinas, she says the community is over-sexualized, criminalized or portrayed as maids and nothing more. Even when minorities are shown in movies, they’re rarely normalized or played by fitting actors.

The Bunche Center for African American Studies’ 2017 Hollywood Diversity Report has shown some changes since last year’s report. Instead of only minority gains in broadcast scripted leads in the 2014-2015 season, there were also more minority leads in film and broadcast reality, as well as a gain in minority broadcast scripted show creators. They still lost ground to their white counterparts in the areas of film director, film writer, cable scripted lead and digital scripted show creator.

Women in Hollywood are given the same fate, remaining under-represented in a variety of areas. Although the years show an improvement, the issues aren’t completely resolved.

“We still have a lot of work to do, there are still some stereotypes. Who’s writing these stories? Are they coming from a real place or what people think about other people?” asked Ortiz.

She thinks Hollywood’s argument of minority stories not selling is “complete bullshit.” Ortiz said people of colour have always been watching shows featuring only white families and they shouldn’t have to.

“Why can’t these characters and families just be people from other cultures or backgrounds and just be represented in the normal way that they are instead of a stereotypical way?” she asked.

Ortiz adds that it’s nice to see some shows, such as Kim’s Convenience, Blackish and Jane the Virgin, come to the forefront now on TV. Instead of portraying certain groups stereotypically, she admires their display of non-white characters as actual people, something that she hopes to accomplish with her films.

Ortiz is also currently working on another film with Harris that tackles marginalized groups. Pick is Harris’ story of a young girl who decides to wear her Afro to school on picture day. She experiences racism and micro-aggression throughout the day that is brought to light in the coming movie.

“It’s all about showcasing these marginalized communities [and] hearing these voices that aren’t always showcased, but in a more universal way that hasn’t been seen before … that a lot of people can relate to,” said Ortiz on the film.

Ortiz’s plan is to start her own production company with Harris where they continue to tackle stories about marginalized groups. She wants to end up with a compilation of films while working with different women and minority groups that shed light on stories that haven’t previously been told.

Life’s too short, rack up that debt