Neda Kalantar, a Ryerson fashion communication graduate, will be in the Big Brother house this season (Courtesy Slice)

Neda Kalantar, a fashion communications graduate, was recently named as one of the 14 house guests who will be entering the Big Brother Canada house for its second season.

A fashion stylist from Vancouver, Kalantar is described on the Big Brother Canada website as “ready to storm the house with her no-holds-barred attitude.” The reality show has contestants living in a house outfitted with over 80 cameras and microphones, where they vie for a $100,000 grand prize by competing in various mini challenges such as “Head of Household.”

If the contestants win this competition, they are free from the threat of eviction but must also nominate two house guests, one of whom will be voted out of the competition by the rest of the house.

“My strategy is to be nice and make as many personal connections as I can, which will be hard to pull off because I’m blunt and can rub people the wrong way,” said Kalantar on Slice’s website.

Big Brother Canada premières on March 5 on Slice, and you can watch Kalantar face off against other house guests on Wednesdays, Thursdays and Sundays. 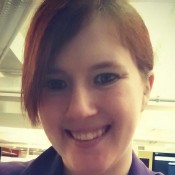