The show is about a fictional big-city mayor embroiled in a controversy surrounding his own crack video. Creating a comedy loosely based on the late Toronto mayor and the scandal he left behind led his brother Doug Ford to call the show “disgusting.” He warned creator and director Andy King to “make sure he is not crossing the street when I am driving down the road,” as reported by the CBC. 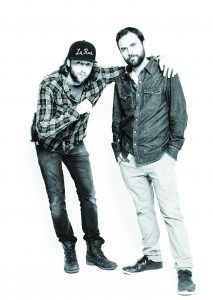 “We’re all scumbags in their mind, but they only want to run down Andy,” said Andrew Ferguson, who founded LaRue with childhood friend Matt King.

Started in 2006, LaRue is a film, TV and digital media production and distribution company known for its award-winning digital series. It was recently nominated for an Emmy for The Amazing Gayl Pile, a comedy about a man trying to become a star on a home-shopping channel.

Andy King, who is Matt’s older brother, dreamed up the idea for Filth City before the Rob Ford saga. He had conceptualized a big-city crime series based in Toronto, where he, King and Ferguson are from. While they were working on the idea in 2013, the scandal arose and they decided to embrace it.

“When that happened it was like, this is a great inciting incident,” Ferguson said. “Let’s have this thing that mirrors truth. Let’s have a character that everyone recognizes, but then let’s blow it the fuck up and let’s have fun with it.”

The team created a digital short, which went viral, and they turned it into a digital series. They will release the first five episodes on Nov. 5 and the rest of the season in the days after.

Ferguson attended University of Guelph for drama and King went to Western University for human resources. They later  reconnected at Ryerson’s Chang School in 2008 to study marketing, script writing and film production. Both interned at eOne, an international entertainment production company with an office in Toronto, allowing them to learn from professionals about how the business works and make relationships that would benefit them down the road.

They created LaRue in 2006, but it was when they bought some real estate on Adelaide Street West about seven years ago that the company started moving.

“It wasn’t until we were hitting it hard, going into work every day saying, you know, now we have to pay for this office space, that things started to really take off,” King said.

In 2011, they produced two web series for Rogers TV called Agnes and Harold and Crown the Town. They said they wanted to find creators and produce as much content as they could, raising funds through their own savings, residuals from other work and even garage sales.

“(Do) odd jobs just to raise whatever scratch just to make content. Believe in that content and eventually you make stuff that people respond to, and it allows you to grow,” Ferguson said.

That’s what they did with The Amazing Gayl Pile. They created the first two seasons with their own money, NBC Universal ordered a third and then CBC ordered the fourth, which is now in post-production with a planned winter release.

“When we did season 1, [we]called in all our favours and did it for peanuts. When it came time to renew, we did everything we could to do another season. Because if we get another season, there’s going to be an opportunity for it to keep going,” King said. “It was a risk.”

King said they met with NBC executives, bonded over booze and their shared love of old WWF wrestling.

“Next thing we know, we got an offer and it sort of changed our world for the better,” King said. “It was great [creatively], but it was also a little bit of luck. You know, you can’t really plan those things. There are so many people that make web series that just don’t make any money.”

King and Ferguson said they are excited about their current slate of projects. King is moving to Los Angeles for the winter to look into opening up an office for them to expand and better reach American buyers and investors.

LaRue has come full circle. In less than a decade, King and Ferguson have gone from interns searching for contacts, mentorships and opportunities, to having young people coming to them to start their own careers.

They began as production assistants, running errands and cleaning up after those they wanted to emulate. But they do not see the same drive in many of those looking for a career in their industry.

“There’s a lot of ambition but not necessarily a hunger to start at the bottom and understand the process.” Ferguson said. “Getting those coffees and taking the garbage out, we took a lot of pride in being production assistants and I think we were very good at it.”

“As much as you want to get here, it’s all baby steps,” King said. “Same thing for us, you know we want to be way further ahead than we are, but we just got to kind of fucking eat it every day and fucking slum it out. You think we like being in this office? It’s OK, but we’d rather be on the top floor.”