Ryerson has a new fashionable partner

After many seasons of offering their expertise to Ryerson students, Canada Fashion Group (CFG) has officially partnered with Ryerson University for Toronto Fashion Week.

“There was a lot of synergy between the students and the university and what we were doing,” said Laura Colonna, director of operations and production. “Education has always been a big part of our fashion weeks.” 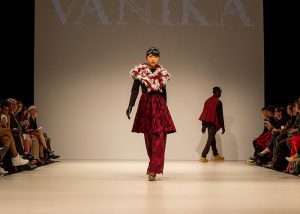 A model walks the runway during Toronto Fashion Week 2016.

According to Colonna, Ryerson fashion students will learn first-hand the operations of working in a professional environment with a hair and makeup crew. They will create a professional collection, with stylists helping choose looks.

Ryerson’s official partnership with CFG will be featured during the first day of this season’s Toronto women’s fashion week runway show.

According to the chair of the school of fashion Robert Ott, Ryerson fashion has a high profile, both within the university with the year-end show Mass Exodus, and also within the Canadian fashion industry.

“We wanted to have a platform that showcases the work that Ryerson fashion students are doing in our school and bringing that to a broader, national and international fashion audience,”  said Ott.

This season, TWFW will showcase the first Women’s Fashion for Hope celebrity runway. The show will raise money for Easter Seals Ontario, an organization that provides wheelchairs for children in need.

“We want our organization to be known as fashion with a heart; an organization that wants to raise awareness for the causes they are raising money for,” said Maria Perez, CFG’s director of volunteer experiences.

Students who purchase a ticket to TOM* Talks or Toronto Women Talks will receive a free ticket to a fashion show. Toronto Men’s Fashion Week runway shows will take place from Sept. 29 to Oct. 1 and TWFW runway goes from Oct. 2 to Oct. 4.