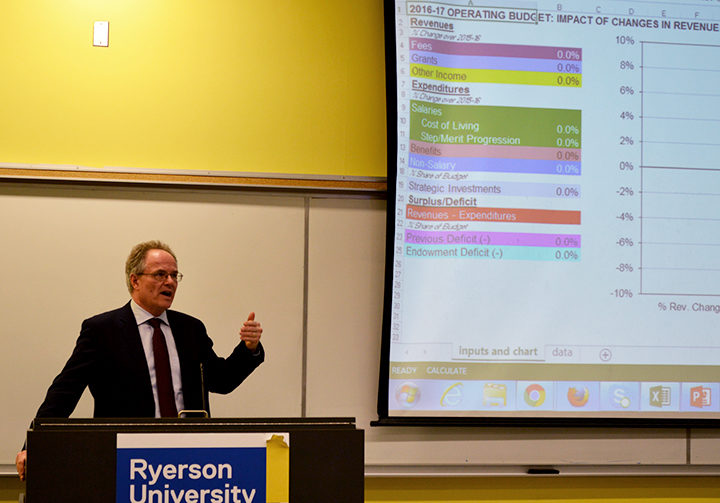 Ryerson’s budget planning has to take into account decreased funding from the provincial government, the university’s deputy provost and vice-provost of planning said this week.

Paul Stenton told a budget town hall meeting that Ontario has not been giving Ryerson an annual inflation funding increase.

“In fact, we’ve seen a decrease over the last few years,” he said.

Stenton hosted budget town hall meetings on Feb. 5 and Feb. 9. He said more contributions are being made directly to students, through the Ontario Student Assistance Program (OSAP). The result of that, he said, is that less is going to the university and therefore can’t be reflected in its budget.

Operating revenues are mostly a combination of government grants and tuition fees.  Tuition fees make up 52 per cent of revenue, while grants are 45 per cent.

The grants had gone down by about one per cent for the past couple years before flat-lining for the current budget. Stenton said at this time it is unclear how much of the next budget will be made up of grants.

If the grants continue to decrease, the separation between tuition revenue and grant revenue will grow – students will continue to contribute the most to the university’s operating costs. Ryerson will maintain a three per cent annual tuition increase, which is the maximum amount allowed by the province.

Ryerson continues to have highest applications-to-registrant ratio in the province, and second largest absolute number of applications in the province. For the 2015-2016 school year, the school expected applications to go down by 2.5 per cent, because the 18-21 demographic is shrinking. Instead, applications were 800 students over the estimated number.

In order to continue a growing number of applications the school will launch one new undergraduate program, four master’s programs, and two PhD programs for the upcoming school year.

The goal of the town hall budget meetings is to have an open, transparent discussion and to allow community members to offer suggestions about how Ryerson should spend its budget in the 2016-2017 school year.

President Mohamed Lachemi said he wants all students involved in the discussion, as well as the Ryerson Students’ Union and the Continuing Education Students’ Association of Ryerson.

Addressing the gender gap in science at Ryerson