Does losing one sense really heighten another? While losing vision may not turn anyone into a real-life Daredevil, Ryerson students found it gave them a new perspective while attending the fourth annual Darkness Concert at Oakham House.

The Darkness Concert took place in complete darkness to raise awareness for the Canadian National Institute for the Blind (CNIB) and those living with a visual impairment. About 30 attendees were blindfolded at the door, then guided to their seats inside the almost pitch-black Oakham Lounge. 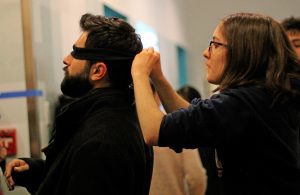 Concert-goers are blindfolded prior to entering the Darkness Concert. Photo by Robyn Bell.

“It’s such a different experience,” said Klaudia Rekas, a third-year media production student and creative director for Musicians@Ryerson. “You really hear the personalities of some of the voices come out, you hear the tone of each voice and how it’s unique.”

Many concert-goers talked about how lack of sight made them more aware of intricate details in the music. Although they only had the streetlights glowing through the windows to see their instruments, some of the eight Ryerson student musicians found the darkness beneficial.

“Honestly, it felt better than performing in a bright light,” said Piotr Mrugacz, a member of Ryerson’s a cappella group Ryenamics who performed at the concert. “You hear the others around you so much better and feel the music. I found myself closing my eyes for most of the performance.”

The event was hosted by Musicians@Ryerson. Lucas Bozzo, Missi Klaric, Nicki Nivi, Adina Vlasov, Rangga Luksatrio, Mark Sunga and the members of Ryenamics each performed a mixture of original pieces and cover songs, including covers of Bruno Mars, Lady Gaga and Ed Sheeran.

While some audience members found their listening experience to be more in depth, George Quarco, who lost his sight at 10-years-old due to a condition called Steven-Johnson Syndrome, doesn’t believe that sight loss can create super-hearing.

Ramya Amuthan, who volunteered to speak at the event on behalf of CNIB, agreed with Quarco that while lack of sight may help with focus, it won’t give you extraordinary hearing abilities. Amuthan was born with Leber congenital amaurosis and is visually impaired. She explained to the audience that wearing blindfolds would help them “experience things in a way that [they’re] not distracted by vision,” and help them to focus solely on the music.

While no one discovered supersonic hearing abilities during the concert, they did manage to raise $100 for the CNIB and gain an understanding of what it’s like to live with a visual impairment.