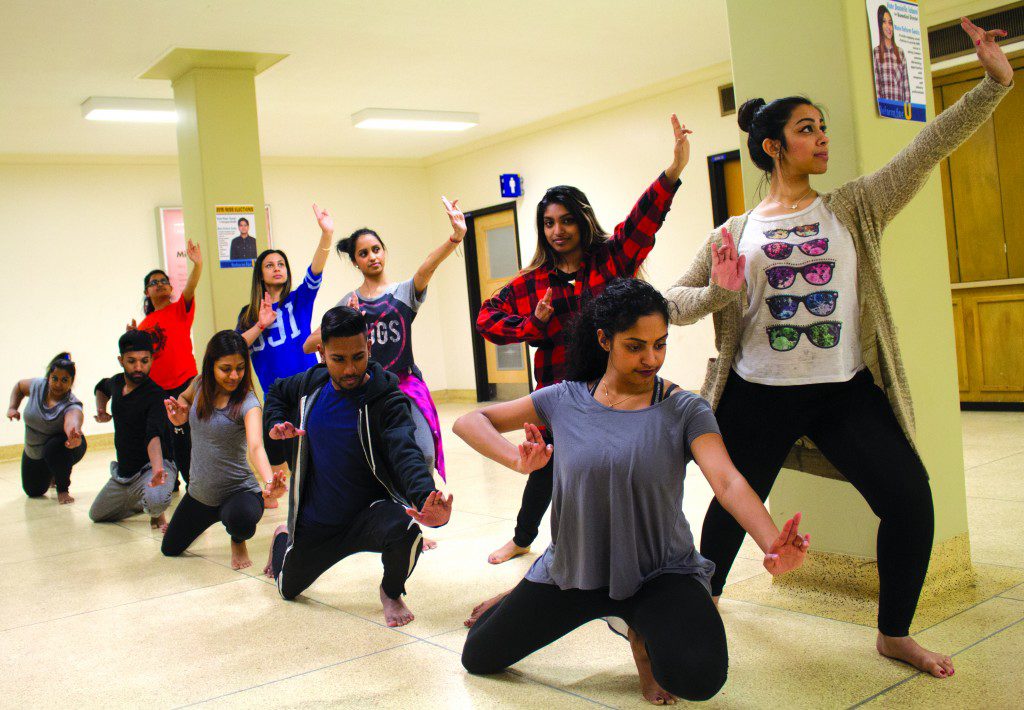 By Sam Crisp and Alexis Goncalves

Ryerson’s Infuzion dance team is leaving it all on the line as it prepares for Bollywood America, the most prestigious South Asian dance competition in North America.

After placing first at Bollywood Dance Canada earlier this year, they will be the only group representing Canada.

“It just happens very quickly,” said Pamesha Pande, a dancer and the incoming president of Ryerson Infuzion. “We just keep moving and hopefully when we’re done, we can take a deep breath and look back.”

For the past 10 years, SAA has competed in both national and international dance competitions showcasing South Asian dance styles like Bollywood, South Asian Classical, Bhangra and the Western Fusion mix.

They’ll be competing against 10 other crews in Phoenix, Ariz., on April 25.

But a switch in the order of this year’s competitions led to new rules.

One of the new regulations stated that Ryerson’s SAA was not able to compete in Bollywood Dance Canada because it did not include outside dancers from other schools. Unable to pass up an opportunity to dance, Ryerson Infuzion was quickly formed in September. While it includes dancers from York University, the University of Toronto and Guelph-Humber, the 30-member team still competes under the Ryerson name. And it is comprised of mostly Ryerson students.

So far, the divide hasn’t seemed to faze the dancers.

When they won the Bollywood Dance Canada competition in March, the group also took home the prize for “Best Costume.”

But all of the success didn’t come without a lot of hard work and dedication.

After school, Ryerson Infuzion practises for long hours, often in empty hallways or wherever they can find the space.

“It’s very difficult to get space, in terms of booking it, because it’s generally really busy with theatre students and other students,” says Pande.

Some of those challenges include constant distractions and interruptions from people walking through the hallways, security or faculty members kicking them out for being too noisy and having to share space with other dance crews who also don’t have practice space.

Their practices are often during the evening hours. Sometimes they practise from midnight to 6 a.m. On Sundays, their practices often run for 10 hours straight, which is part of the reason why they have such a hard time booking space.

Pande says they put a lot on the line for dance and it means the world to their team to be able to showcase what they know about their culture and to belong to such a close-knit community. To Pande it “feels like home.”

South Asian dancing is starting to become more popular in the mainstream dance scene and Pande believes the growing popularity has a lot to do with celebrity influences, the vibrant culture and incredible fashion sense.

Naveed Tagari, the president of Ryerson’s SAA, admits that a couple years ago he had no interest or knowledge of South Asian dance but now has a genuine appreciation for it.

“Whether you do or don’t dance, it’s something you end up enjoying and starting to love. Otherwise, I guess these individuals wouldn’t be here if they didn’t (love dancing)” says Tagari.

Families of Infuzion members have been supportive, some offering loans to help fund their trip to Arizona. The team needs to raise $25,000 in order to compete in Bollywood America. So far they have raised $11,000.

They hope to raise the rest of the money through sponsors, their fundraising campaign and grants, so they can represent Ryerson on an international stage and become champions in the South Asian dance circuit.

“But I think the biggest thing that (binds) us together is that we represent Ryerson.”

This Week in Magical Thinking: David Foster Wallace’s This Is Water