Ryerson University’s fashion students will be featuring their designs during this season of Toronto women’s fashion week. With opportunities from Canada Fashion Group (CFG), runway shows, and Toronto men’s and women’s fashion week talks, Toronto is a hub for fashion enthusiasts with the desire to start off their careers in the industry. 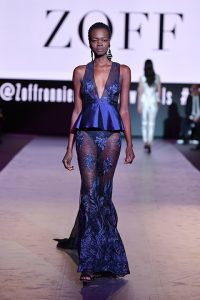 “Dream bigger than this city,” Zoffranieri said. “And dream even bigger than what they can imagine.”

“At the end of the day we have so much work to do as creative people, why should we get stuck in a bubble of dreaming small? Let’s dream big, let’s dream global, let’s dream universal,” Zoffranieri said.

Zoffranieri is excited to see a lot more collaborations and direct mentorship that will motivate designers to work out of the city as opposed to flying the coop.

“If we can have these bonds and strengthen them, especially with the students, going forward in the future I think it would be a really great way to keep our designers in Toronto,” Zoffranieri said.

Zoffranieri continues to practice skills from Ryerson’s school of fashion, such as scaling back and simplifying an extreme idea. For example, making an extravagant piece may work for the runway, but it’s all about acquiring taste while attending school for fashion.

“When you are in critiques with your professors they kind of instill a mindset in you. So that can either be a really good thing or a really bad thing. It helped me, so I can’t really complain,” Zoffranieri said.

When Zoffranieri decided that ZOFF should have a label principle, he chose the mantra “Art is movement.”  The school of fashion alumni favours art and the idea of moving forward, and the principle was adopted by a latin term in its direct translation.

“Circling back to that moment personally as an artist creator and storyteller, being able to keep true to that moment in my life where I just wanted to create really beautiful things or what I felt was beautiful – I think it’s important for me to stick to my guns that art is movement,” Zoffranieri said.