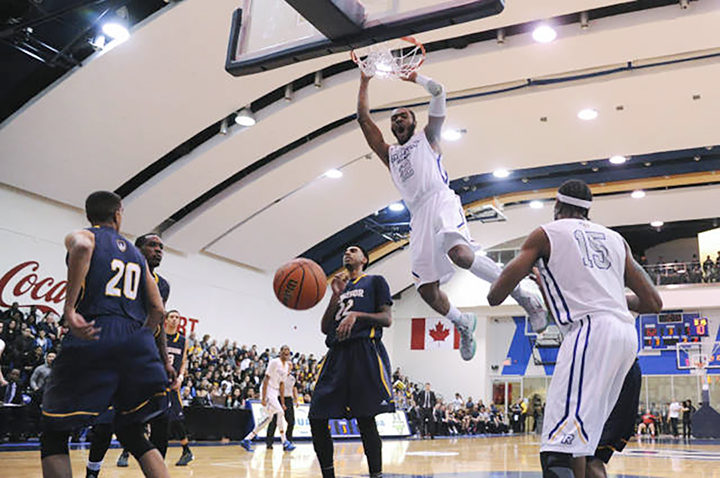 Ryerson’s men’s basketball team was 2-1 in the CIS Final 8, giving them their second bronze medal in two years. (Courtesy of Khristel Stecher)

While the team didn’t meet its goal of winning a gold medal, it is still optimistic about what its finish means for the future of basketball at Ryerson.

“It was a crazy ride,” said Rams guard Adika Peter-McNeilly. “There were a lot of ups (and) a lot of downs. Our first regular season game we won by one against U of T and then beat Brock by almost 20 or 30. It was kind of up and down, but it was an amazing season and I would never change it.”

This has been a wild season for the men’s basketball team. After winning the CIS bronze medal last year, the team entered this season hungry for more.

Patrick Tatham, interim head coach of the Rams, was hopeful going into the CIS tournament.

“We got the bronze last year and I don’t think anybody on the team, whether new or old, wants another bronze,” he said just before the CIS tournament kicked off.

“They want gold again. They know the feeling of winning gold after Saturday (at the Ontario University Athletics finals).”

The road to Vancouver started when the team hit the court in its first practice of the season. Last year was a fantastic year for the team, and they were looking to build off of it. Ultimately, they were able to do so.

The Rams finished the season 17-2, which tied a program record. The team also held the No. 1 spot in the Canadian university rankings, the first time for any Rams team.

When the OUA playoffs began, the goal was simple — bring a championship banner to Ryerson. For the first time in program history, the team was successful in doing so. In order to achieve this feat, the Rams team lived by two words: “Be uncommon.”

“Being uncommon was just trying to do something different than any other team has ever done here in men’s basketball,” Tatham said. “The guys accomplished it.”

When the team entered the CIS Final 8 tournament, the pressure was on. They were seeded as the No. 1 team for the first time in Ryerson men’s basketball history.

While the team obviously would have loved to go 3-0, a 2-1 record earned them their second CIS bronze medal in two years.

It was Aaron Best, Andy Agyepong and Kadeem Green’s last game in a Ryerson Rams uniform. They went out on a high note and will go down in history as three key components in a record-setting season.

“(They bring) leadership,” Peter-McNeilly said. “Andy was the loudest guy in the lockerroom, always making sure everyone was in a happy vibe and motivating everybody. Aaron was a leader on the court, and Kadeem was the rim protector.

“Missing those three guys is going to be crucial, but we’re confident that we are going to get other guys coming in next year.”

While the players had a major impact on the season, the work of interim head coach Tatham cannot be overlooked. Tatham won both OUA and CIS coach of the year in his first season after taking the reins when Roy Rana went on sabbatical.

“I couldn’t be happier for (Tatham),” said Ivan Joseph, the director of athletics at Ryerson University. “He’s a great young coach. The best thing about Patrick is he’s humble and he accepts mentorship.

“The players love him. He is a players’ coach and he is about relationships. He does what is best for the players. He is always about the students and he cares about them, and you can see that they play for him.”

For Tatham, the future is currently uncertain, as Rana will most likely be returning as the head coach of the team. After winning the two biggest individual awards for a coach this season, Tatham is unsure about what is in store for him next year.

“I continue to learn and I am going to continue to learn,” he said. “Hopefully if the future is bright I can take over my own program next year. If not, I can’t wait to be an assistant for Roy again next year if he is back.”

When a team is able to fly across the country and bring home a medal, it adds character.

Looking forward to next season, this trip to the nationals will only help the team. Peter McNeilly used one word to describe what the team will take from the experience.

“Bonding,” Peter-McNeilly said. “With all the guys that are coming back and having that mentality that we can win on the road is huge.”

With great coaching, camaraderie and young talent coming up, watch for the Rams to do even more damage next season. This is a program on the rise and is not to be taken lightly.

With files from Bryan Meler

Ghomeshi found not guilty on choking and sexual assault charges