Hayden King says you can count the number of Indigenous faculty members at Ryerson University on one hand.

King is the director of Ryerson’s Centre for Indigenous Governance and an adviser on Indigenous education for the Faculty of Arts. With only five Indigenous academics on Ryerson’s faculty, he says, the university has a tremendous problem with representation.

King spoke alongside Sarah Dennis, a social work student and an organizer of Ryerson’s Indigenous Students’ Association, and Curtis Maloley, the educational developer in Ryerson’s Teaching and Learning Office, at an event on Monday afternoon. 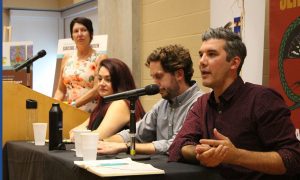 The panel, called Truth and Reconciliation Movement Across the Ryerson Campus, was one of the first events to kick off Ryerson’s 7th annual Social Justice Week.

From relationship-building to collaborative work and curriculum changes, the speakers explored how university campuses can move away from feel-good, symbolic developments and towards initiatives that can establish tangible outcomes for reconciliation.

The Truth and Reconciliation Commission’s 2015 report made 94 calls to action, several of which specifically addressed post-secondary education.

The report prompted a series of consultations at Ryerson.

Dennis, who is Anishinaabe, says the lack of representation in Ryerson’s teaching staff has trickled down to Indigenous students and affected their ability to find their place in the university’s community.

In class, she says, she has to fight for her voice to be heard.

“It would be really nice if people were interested in respecting anything that we have to say about ourselves and our experience, because everything else is literally shoved down our throats.”

King says the Faculty of Arts currently has two job postings looking for Indigenous scholars. But more programs need to commit to making these hires, he adds. 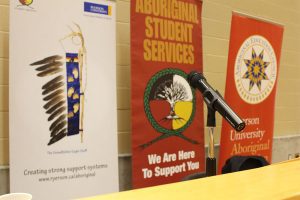 The Truth and Reconciliation Movement Across the Ryerson Campus, was one of the first events to help kick off Ryerson’s 7th annual Social Justice Week. (Photo by Kate Skelly)

“If they aren’t working towards recruiting Indigenous faculty, then that’s a glaring hole in our rhetoric around reconciliation,” King said at the panel.

The public backlash from the campaign still riddles Dennis’s mind, sometimes as a disheartening sting, but other times as a motivating reminder to continue advocating on behalf of Ryerson’s Indigenous students.

King says students have a lot more power than they think.

Tristan Raymond, a third-year arts and contemporary studies student who attended the panel, travelled across Canada this past summer using one of Via Rail’s Canada 150 Youth Passes.

Meeting people who knew so much about their local First Nations communities affected Raymond. Growing up in Mississauga, he says he never recognized the Indigenous history in his hometown.

Raymond says attending events at Ryerson’s Social Justice Week is about more than just looking trendy or “woke,” as he describes some students’ mentalities about social advocacy on campus.

“It’s honestly just about education,” he said. “Some people at school here don’t even know who (Egerton) Ryerson is, or who he was, or what he stood for…and that’s got to be the biggest thing — actually opening that discussion.”

Raymond sees Ryerson University taking steps forward by sparking conversations about reconciliation and by not being afraid to talk about them in the face of debate, conflict or tension.

Up on the panel, King agrees.