written by Prajakta Dhopade January 28, 2015
A film festival held at Ryerson will be the first in Toronto to showcase issues surrounding queer youth.
RyePride, Ryeflix and an external organization called Get Real will collaborate to host the three-day Queer Youth Film Festival at Ryerson this week. The free event will give filmmakers the chance to show their work and encourage discussions about diversity among everyone, queer or not.

“Many of the organizers of this event don’t identify as queer or anything on the LGBTQ range,” says Sarah Lane, co-founder of Ryeflix. “We hope that these events, because of them being free and in an open and accessible area, that it will bring together people from all walks of life and create a sense of understanding.”

Although there are many LGBTQ events in the city, such as the Toronto LGBT Film Festival, this one hopes to offer a different perspective.
“All of the films we have not only are directed for a youth audience, but they also are telling youth narratives, which we thought was important,” Lane says.
Two of the five films that will be shown are works by Ryerson students.
Meaghan Gable, a third-year film production student, says she’s happy to get a chance to show hers.

Gable’s short film, Glowworm, is about a character who’s pressured by peers to define her sexual identity, and the hypersexualization of youth portrayed in mainstream media. Gable also wanted to challenge the under-representation of queer youth in television and film.
“I really tried to make the main character a visual minority. The actress is Egyptian. I didn’t just want to make it a white struggle,” she says. “I wanted to make it an intersectional sort of film.”
The film festival runs from Jan. 28 to 30, starting with three short film screenings and a directors’ panel discussion. 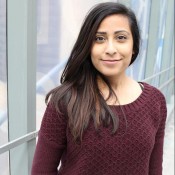