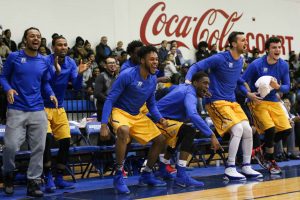 The Ryerson Rams are looking for their second ever OUA championship tonight as they face off against Ottawa in the nation’s capital. Courtesy Luke Galati

During guard Adika Peter-McNeilly’s four years at Ryerson University, he says the difference in attitude surrounding the university’s men’s basketball program is night and day.

“It’s amazing,” he says. “When Aaron [Best] started here, the expectation was to try to go to the final four. Now we want to win OUAs, we want to win nationals.”

He says that the mood within Ryerson’s basketball program has improved tremendously over the years, and has had a trickle-down effect. This leads to new players and recruits to buying into the system early, creating higher standards for the team.

The expectations are clearly rising as the Ryerson Rams made history last season, winning their first-ever provincial championship at the Mattamy Athletic Centre.

The Rams’ first Ontario University Athletics (OUA) championship was led by assistant Patrick Tatham behind the bench, as coach Roy Rana took a one-year sabbatical. Rana is now aiming to lead the team toward back-to-back provincial glory for the first time in the school’s history. Ryerson will take on the Carleton University tonight in the OUA finals on the Ravens’ home court in Ottawa at 7 p.m.

By virtue of their semifinal victories, each team heads to the national championships in Halifax on March 9 to 12. It is the Rams’ third straight trip to the nationals, although their first one was as host at the Mattamy Athletic Centre in 2015.

For coach Rana, who came into this season with six new players on the Rams roster and a new-looking coaching staff, it has been a year of adjustment and building.

“Our staff is all new and has committed to how we operate and how we function, so we’re feeling pretty confident,” he says. 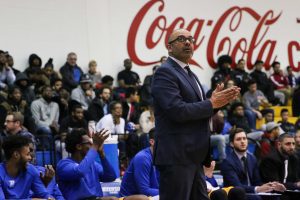 While it has taken increased attention to detail, Rana says that the new players have figured out their role on the team and understand its philosophy.

This year, Peter-McNeilly has been more than emblematic of a winning program on the hardwood. He is one of the most dominant forces to watch in the nation on a nightly basis.

He averages 19.2 points and seven rebounds, while shooting 47.3 per cent from the field and 37.5 per cent from behind the arc. This was enough to name him as one of the top five players in the country, being named this week as an OUA First-Team All-Star.

But he was not alone in the honour, as second-year Rams guard Ammanuel Diressa was also recognized.

“You want to celebrate with someone else. Individual achievements are nice, but sharing that with someone you call a friend is amazing.”

Peter-McNeilly adds that Diressa is a quiet leader, but he’s the type of player who elevates the game of those around him by being a silent gym-rat and student of the game who works hard. 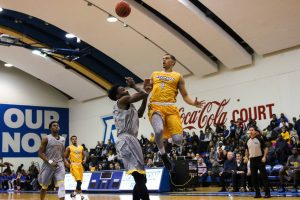 Ammanuel Diressa, an Eastern Commerce graduate, has gone onto become the Rams’ greatest threat from behind the arc, shooting 41.3 per cent from three-point range. Courtesy Luke Galati

Peter-McNeilly says that losing last year in the national semifinals against Calgary still leaves a bitter taste in his mouth. He finished with a team-high in points (22) and minutes (40), but shot 35 per cent from the field in an abysmal shooting game for Ryerson.

“Those are daily reminders [of] how much I want it,” he says.

For Peter-McNeilly, this is exactly what is fuelling him going into his final stretch wearing a Rams uniform. “I thought about the year before and how I don’t wanna feel like that again. I want to be a winner. I want to be able to say I did everything I could do as a Ram and say I gave it my all.” 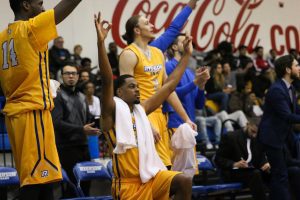 Adika Peter-McNeilly celebrates his teammates’ shot while on the bench. Courtesy Luke Galati

Here’s a look at how Ryerson has stacked up in the past:

Ryerson lost a close game against Carleton in February, falling 82-77 in Ottawa. The Carleton Ravens are currently the No. 1 ranked team in the nation.

The Rams beat the Gee-Gees 94-88 just over two weeks ago at Montpetit Hall. In that game, the Rams were led by their dynamic guards, Peter-McNeilly, Diressa and Myles Charvis. They combined for 54 points and seven steals.

As for the Rams’ other potential opponent in the finals, the Brock Badgers, the Rams lost 74-65 in a jam-packed Meridian Centre earlier this year. Guard Johneil Simpson and Dani Elgadi both put up 17 points in the effort against Ryerson.

But Rana says that he is focusing on taking it step by step this year at the OUA Final Four. You can’t walk into someone’s home in the nation’s capital unless you open the door first, after all.

“I’m not worried about that feeling of lifting the championship trophy,” he says. “It’s not about lifting the trophy, it’s about being prepared for today and going from there.”

Film Fridays: Get Out