In a team sport, how much weight does each individual really carry?

Dragon boat racing is a sport where the team that works together, wins. What happens when you dismantle that team and test each paddler  on their own strength and endurance in an intense indoor competition?

Arthur Yuen, a second-year biomedical student, said he “didn’t really know what to expect” the first time he used an ERG. “But now it’s every bit as intense as other competitions. The atmosphere here is great.”

Engineering student Jeffrey Wu had a different expectation for the championships. This is his fourth year in mechanical engineering and he said he now has the time to join the dragon boat club. “It’s pretty much everything I expected. Lots of screaming, lots of fun and lots of great energy,” said Wu.

Ryerson’s dragon boat club holds practices on the ERGs several times a week. Paddlers on the team are expected to take advantage of the machines to improve their stroke.

“The machine is such an awesome piece of technology to help you out with your paddling ‘cause you can really focus on all the little fundamental skills that you’re learning,” said Jodie Yew, a fourth-year student on Ryerson’s team. “And it’s kind of satisfying watching the time go down as you’re paddling – even though you’re not moving.” 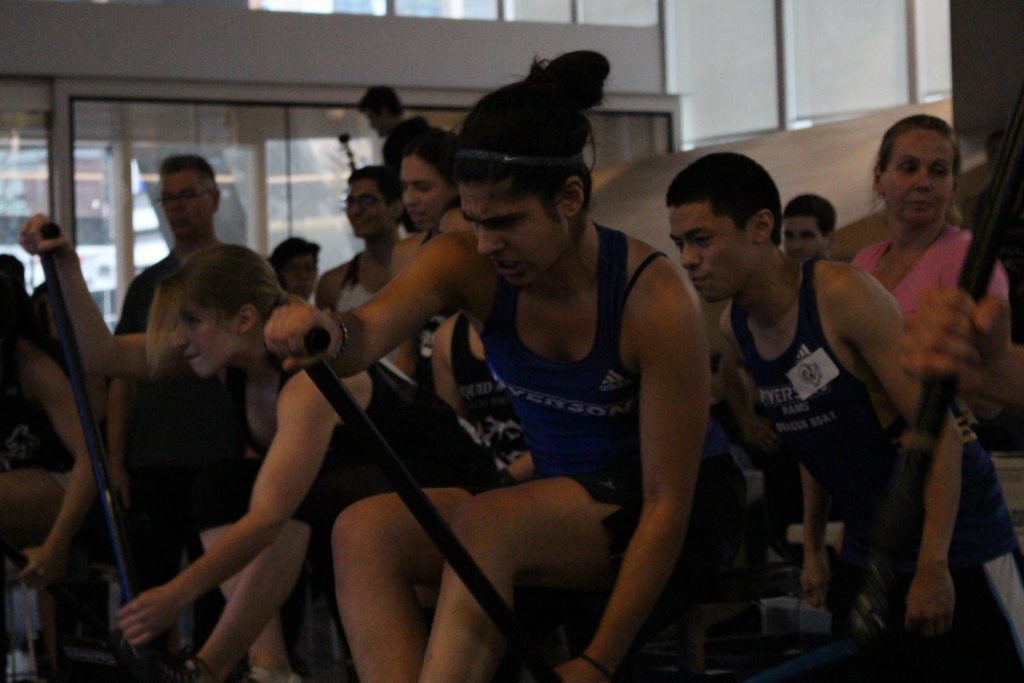 This is different from a typical dragon boat race, held on the water during the summer with 19 other paddlers on-board. But Scott Murray, an organizer from P3 Paddle Zone, says the winter is a great time to host an indoor dragon boat competition.

“This is the perfect time because there’s snow outside and the summer still feels a bit far away so it gives you something to organize your training for,”  said Murray.

Ryerson’s dragon boat club head Nick Fan told the paddlers that this may be the last time Ryerson will host the OUIC until 2020. He has instructed them all to treat the competition seriously and give it everything they have.

OUIC started five years ago at Guelph University. There were around 30 paddlers signed up for that event, compared to the 131 paddlers that competed this year.

“Ryerson attended and they saw a vision, they saw an opportunity for growth and their vision matched mine,” said Murray.

Ryerson has hosted the OUIC three out of five years. Originally the host would change each year, but other schools haven’t stepped up to hold the event at their school.

“But it’s always a great way – sometimes to find a diamond in the rough. Find that shy person who maybe doesn’t have that outgoing personality and you’re like, wow, look at their skill,” said Murray.

Yew agrees, saying the competition is a great way for paddlers to show coaches skills that would work well in the boat. “It really helps you … to show off what you can bring to the team as well. When you’re pushing yourself to improve, that’s obviously going to help the team later on,” said Yew.

Ultimately, dragon boat is a team sport. Each school cheered loudly each time their athlete was on the ERG racing. Although it’s the first competition related to dragon boat for many of Ryerson’s paddlers, Wu said he is looking forward to getting to work with a team on the water.

“I’m all about the team because synergy and time coordination – that was one of the things that really attracted me to dragon boat when I started,” said Wu.

“(I hear) it’s really different being on the water. But I hope to (paddle with a team) at Toronto Islands or at Montreal,” said Yuen.

Ryerson’s Dragon Boat Club will be competing in several regattas this summer, and will face off with many schools who participated in the event Saturday. For now, indoor training continues and paddlers will work to improve their race times from the championships.

How I handle a long-distance relationship and anxiety