A- isn’t a perfect score, but it’s considered Canada’s best.

Last week, Our Turn, a student-led advocacy group assigned grades to Canadian schools based on how they each deal with sexual harassment. With a A-, Ryerson came out on top.

The grades were included in a new action plan, created to put an end to sexual violence on campuses. Fourteen post-secondary schools across Canada were evaluated for their policies.

The group assigned the scores after examining the standalone sexual violence policies at each university based on a set of criteria they had constructed. 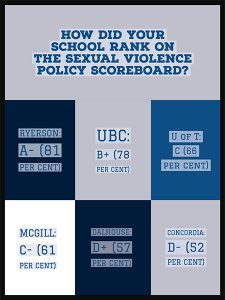 Kelsey Gilchrist, co-chair of Our Turn, says Ryerson’s grades can be attributed to three main factors.

The first is face-to-face protection, allowing survivors to not have to face their perpetrators. The second is Ryerson’s formal and informal justice mechanisms, as one type of method for justice does not work for everyone. Lastly, Gilchrist highlights Ryerson’s education and support for sexual violence victims as outlined in its policy.

“Where Ryerson is strong is in sexual violence education and prevention, as well (as) in providing formal and informal justice mechanisms and giving survivors options in that sense,” said Gilchrist.

Our Turn made up their criteria based on text alone, focusing on what was written and how it was written in each policy. Although the group met with students from the schools, the grades did not take into account personal experiences and anecdotal evidence.

Gilchrist believes that there are still big improvements for Ryerson to make.

The university’s current review committee is made up of members that all belong to Ryerson. She suggests that the committee be restructured to include a third-party member and student representatives.

The score alone is a standing point for the university to continue to build upon.

“For Ryerson, an A- means that you have a policy where survivors feel like they can come forward potentially,” said Gilchrist. “You have a policy that will take some measures to protect survivors. That being said, an A- is not a success yet. We really want to see universities push to hit that A+ criteria.”

Although Ryerson’s policy for sexual assault looks good on paper, the question of how well Ryerson is doing with the application of its strategy remains.

Andres Herrera is the coordinator for Rye Pride, an equity service group of the Ryerson Students’ Union. Herrera says that Ryerson receiving the A- is not surprising.

“Campus has many policies and we have had strides to be better, but at the same time there is much more to do,” said Herrera. “[Assault] constantly happens, it needs to be addressed. This doesn’t end by one policy, it is continuing to look at the policy and going from there.”

Susanne Nyaga, president of the Ryerson Students’ Union, says the university needs to strive towards perfection, and more work needs to be done.

“An A- is good, but it’s not an A+, and I think that when it comes to survivors and the violence and the trauma that survivors face we need to be at an A+, otherwise we’re failing the students.”

“People were in a position where they were following a policy and it wasn’t coming alive, so the point of our office coming in was to take the policy and make it come alive with campaigns and programming, and also support,” said Khan.

The office gathered information which created the new policy that came about in 2016, giving them a platform to build upon. They had student survivors read the revised policy, which was passed by the board in 2017.

Khan says the new policy is in line with the Ontario government regulations and expectations for what a policy should have.

In response to the A- grade from the Our Turn report, Khan said that it is a further encouragement for the office to improve.

“I don’t think it’s about the grade for us, it’s really about what can we learn from what students said. Because that’s what’s exciting about Our Turn, it’s written by students, it’s student-led, and it’s an opportunity for us to really hear especially from survivors that really shape that conversation,” said Khan.

She says it helps them to continue to ask questions.

“How do we listen, even if the questions are tough, even if the feedback is really hard to hear sometimes,” said Khan. “But it’s important, we need to listen to it. And then, how can we respond and take action?”

When asked about former complaints made about the OSVSE, Khan refused to comment.

The OSVSE will be reviewing the new policy in 2019, including the information received from the Our Turn scorecard in their report.

“Policies are only as good as the practice, and I think we have a long way to go with that practice,” said Khan.

If you or someone you know has a personal experience relating to sexual assault on campus, the Ryersonian would like to hear from you. All conversations are confidential. You can email Jessica Cheung at kycheung@ryerson.ca for more. 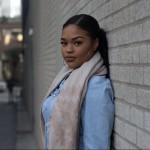