Ryerson students can now be notified if anti-abortion protests are happening on campus.

The Ryerson Reproductive Justice Collective launched a mail-alert system this week and anyone can sign up with just an email and a name. The system was inspired by Ryerson security emails, said RRJC co-leader, Emily Eymundson.

“We at the RRJC see these protests on campus as (being equally) threatening to students as many of the other topics that are covered by the security emails provided by Ryerson,” she said. 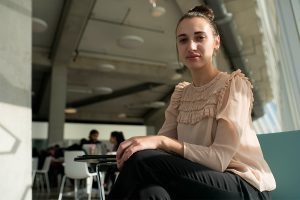 Co-leader of the RRJC, Emily Eymundson, is in the creative industries program at Ryerson. (Photo by Natasha Hermann)

“We wanted to create a similar function, where folks don’t need to directly be engaged and confront the protesters by just walking and stumbling upon them on Gould Street just to know they’re there.”

The RRJC is a reactive effort against anti-choice protests that started in September 2016. Members alert students to the protest’s location and hold signs in front of the protesters. They also cultivate safe debrief spaces at the Centre for Women and Trans People.

The collective is also hiring volunteers for an organizational committee. Responsibilities will include counter protesting efforts and organizing events. A Google form to apply is posted on the collective’s Facebook page.

Eymundson says the RRJC always has to assemble on a whim. They gather when they learn an anti-abortion protest is in progress on campus. The collective is currently composed of four members, who are not always able to show up.

“We’re students, we have commitments, we have classes. We also only have so much emotional capacity. Unfortunately, we aren’t always able to protect other students because we need to protect ourselves first,” Eymundson said.

“This is an issue that happens almost every single time they’re on campus. Just getting there on time and being able to do that blocking. Sometimes it doesn’t happen.

“When reality strikes and we are not able to protect students by being on the ground, the guilt that we feel is tremendous. That alone is a huge amount of emotional labour.”

If the collective can expand, so will its efforts. So far, Eymundson said there are plenty of applicants.

“We’re incredibly thrilled that so many folks want to be involved on our organizing team, it really does show that this is an important initiative. It also shows that there are a lot of folks who care about it,” she said. “It makes the world seem like there’s still good people in it.”

The collective has spoken with Ryerson’s administration in meetings and town hall discussions. 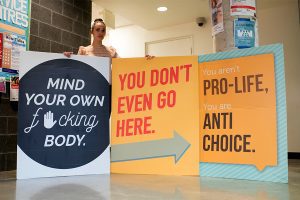 Emily Eymundson, co-leader of the RRJC stands with signs the group uses to block posters brought by anti-abortion protesters. (Photo by Natasha Hermann)

“(We haven’t) seen much response from (Ryerson’s) end, so we’ve continued on this year, looking into other solutions to provide safe and secure space on campus,” she said.

Eymundson said the collective is exploring potential provincial and federal government level changes, including the laws surrounding the public display of graphic images.

“All of the work the RRJC does is reactive. It’s counter protesting. We’re looking for more proactive solutions. So far, that looks like we’re expanding beyond the Ryerson administration level.” 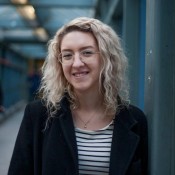