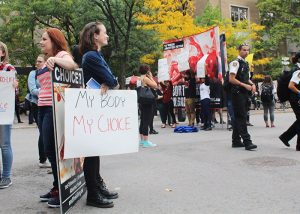 However, according to the agreement made in April of 2012 between the city of Toronto and Ryerson University, Gould street belongs to the city and is not private property. Gould street is therefore protected under the Charter of Rights and Freedoms, preventing Ryerson from taking any action against the group says vice-provost Heather Lane Vetere.

Ryerson VP admin & finance Janice Winton spoke at a round table discussion with the Ryerson Reproductive Justice Collective (RRJC) — a group of pro-choice students, on Jan. 23.

James L. Turk director of the Centre for Free Expression, Rabbia Ashraf president of Continuing Education Students of Ryerson (CESAR) and VP of equity for the Ryerson Students Union (RSU) Tamara Jones were also in attendance.

RRJC members Chrissy Lynn Trudel and Hannah Reaburn brought the meetings attention to the concerns raised back in September when pro-life protesters started handing out fliers and brandishing posters with images of aborted fetuses on Gould Street. At the time the student group demanded that Ryerson university step in and ban the protesters from campus grounds and provide support for students who were affected by the graphic nature of the posters.

Turk said the university could not provide students and members any form of legal protection against offensive speech if the expression of the viewpoint was non-violent.

"The action is not to suppress speech but to combat it with more speech. Or the suppression becomes endless." Says James L. Turk #Prochoice

Vetere went on to add, “that the university could [however] provide psychological support for the students affected.”

Representatives from CESAR attended the discussion in support of the RRJC. Jones, also indicated their support for the collective with Jones adding that the RSU was working to bridge the gaps between the two groups; taking into consideration the limitations of one and the betterment of student lives on the other.