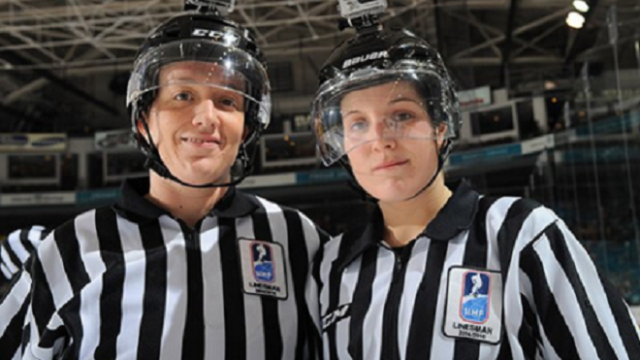 The puck drops as Canada and the United States battle it out in the championship game of the 4 Nations Cup. The linesman skates down the ice. Her voice echoes, “No,” as she waves off an offside.

If you’re a Ryerson student who has had anything to do with athletics, you would recognize the voice, this time heard from the TSN broadcast. It belongs to Vanessa Stratton, the Ryerson skate training coordinator. She was representing both Ontario and Ryerson in the first international women’s hockey tournament since the Olympics.

Hockey Canada selected Stratton as one of the officials chosen to referee at the 4 Nations Cup in Kelowna, B.C. from Nov. 4-8. She worked three of the first four days of the tournament before being selected for the gold medal game.

This year’s 4 Nations Cup is the second tournament of its kind Stratton has officiated. Her first international experience was in 2010, and she’s participated in six international events to date. She’s also been named as one of three Canadian officials working the International Ice Hockey Federations Under-18 World Championships in Buffalo, N.Y. in Jan. 2015

Selection to officiate the championship game for the 4 Nations Cup is based on the referee’s performance throughout the tournament. Her initial description about getting handed the piece of paper – that is how she was assigned – was that she was pretty lucky.

“For me, it was a little bit of relief. I mean I’ve had a really tough start with work and everything. My schedules have not been as flexible, so I haven’t skated that much. So going into (the tournament), I felt a little uneasy this year,” said Stratton. “I worked hard for the week and I’m really glad it paid off.”

Stratton started refereeing when she was 15 years old, thanks to some advice from a more experienced on-ice official.

“My dad was an NHL linesman, so when I was going through high school instead of going to get a part-time gig at McDonalds or something, he said ‘why don’t you go referee?’” said Stratton.

Stratton has worked as an official since she was 15, but took a two-year break to play varsity hockey at Brock University.

She says her other job, coordinator of Ryerson Skate Training, improves her officiating.

“I’ve found that doing what I do at work, between the on-ice instruction and the treadmill instruction and going on myself, has really benefited my skating in terms of the acceleration component and just overall technique,” said Stratton.

At international competitions, the officials are put through skating tests, such as 40-metre sprints forwards and backwards and a five-lap endurance test.

“So if I can’t make it to go referee a game, at least my work is out on the ice,” said Stratton. “It has been a good balance.”

She also feels that Ryerson gives her support that another job wouldn’t. Working in an athletic community, people understand what she is doing and support her along the way.

It may also help that she is not the only one who has had the opportunity to participate in events such as this one. The Ryerson women’s hockey head coach, Lisa Haley, took a year off last season to pursue her dream of coaching the Olympic team. Alana Goulden, Ryerson’s equipment coordinator, also took time off this past week to work with Team Canada as their equipment manager at the Four Nations Cup.

There is still one more step for Stratton, though – something most females who participate in hockey dream of.

“I would love, I mean that’s my end goal, to get to the Olympics. I think that I have a good shot at 2018,” Stratton says. “I just really need to continue to work on fitness, continue to skate really hard, keep that work ethic up and be a good teammate on the ice.”