After watching her son deal with mental health issues over the past year, Beverly Petrovic, student affairs co-ordinator for Ryerson’s school of journalism (RSJ), is hosting a fundraiser for those facing the same battle.

The event called “A Night To Shed Light” will take place Oct. 14 at the Holiday Inn Downtown Toronto Centre, located at 30 Carlton St.

The night will mark almost exactly a year since Petrovic’s 16-year-old son, Sasha, was admitted for care. 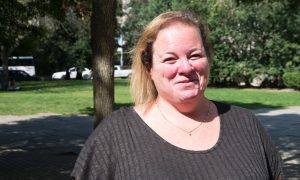 Beverly Petrovic says all proceeds from her fundraiser will go to the SickKids Centre for Community Mental Health, where her son is being treated. (Photo by Evan Manning)

Concerns for Sasha arose when he started breaking objects in their apartment. At the time, Petrovic had absolutely no idea what was going on.

“He destroyed our apartment. We’ve had the cops come, and we’ve had him taken away in handcuffs,” said Petrovic.

Sasha was brought to emergency psychiatric wards, but no issues with his health could be identified. Petrovic then took him to the Centre for Addiction and Mental Health (CAMH), but they were turned away.

“They said his anxiety wasn’t high enough, so he didn’t qualify,” she said. “We went to one hospital four times in one week, and they told us he just needs to breathe and needs family counselling.”

During their last visit to the same hospital, they were told to go to St. Joseph’s Health Centre. There, Sasha was admitted for care on Oct. 15, 2016.

Eight months ago, Sasha was diagnosed with mental health issues. Planning for the fundraiser began in May.

The aim of the fundraiser will be to raise awareness on such issues and proceeds will be given to the SickKids Centre for Community Mental Health, where Sasha is currently being treated.

“The residential treatment he’s in now is great, but I figure if I can give back to them, with everything they’ve helped my son with, why not?” says Petrovic.

Besides mental health awareness, she brought up another very important theme for the night.

“The whole theme of the event is family. It’s not just the person with mental health issues who gets affected, but the whole family,” says Petrovic.

Attendees will be treated to two drink tickets, a dinner buffet, dancing, speeches and a silent auction.

Auction prizes will include a free massage, a dinner for four at Barberian’s Steak House, a number of free tickets to Cineplex movie theatres, a one-night stay at the Holiday Inn, two tickets to the Christmas show put on by Ryerson’s school of performance, and more.

Tickets are currently $100, but Petrovic says students looking to attend the fundraiser can pay a discounted price of $60. So far, 75 of the 100 available tickets have been sold. 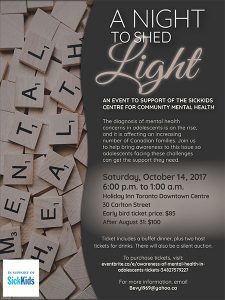