By: Emma King and Maddie MacNeil

It’s 4 p.m. and you’re home from school. Although you should probably be doing your homework, you sit on the couch and turn on the TV. You’re feeling nostalgic, so maybe you’ll watch a couple old episodes of Degrassi: The Next Generation. But then you remember the third season of Narcos was released and you haven’t caught up yet. You’re torn between the two. Two completely different shows with different casts, right?

Meet Raymond Ablack, a 27-year-old actor from Toronto who plays both Sav Bhandari in Degrassi: The Next Generation and Agent Stoddard in the third season of Narcos. 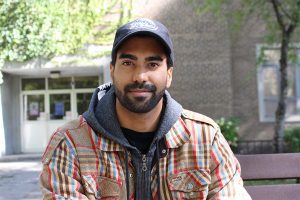 Ablack is currently in his third year at Ryerson. He took a year off studies to film season three of Narcos. (Photo by Emma King)

Ablack, a third-year broadcast student at Ryerson, said he has been given the chance to both go to school and continue his acting career.

He decided to pursue a broadcast degree simply because he felt that if he wanted to be a part of the acting industry, he should know all aspects of production and media. Ablack said his program has opened him up to many possible career paths aside from acting.

“There have been courses that have made me think, maybe I want to produce now. But also, I like comedy writing and I still like acting. I’m not entirely sure. I love sports and maybe I’d like to be a sports broadcaster. That’s yet to be discovered. We’ll see,” said Ablack.

Ablack said his acting career didn’t start overnight. It began when his parents took him to see a production of The Lion King at the Princess of Wales Theatre, where a boy was playing the role of Young Simba.

“I walked away from that show thinking, ‘I can do what that kid was doing,’” said Ablack. He then went on to audition for the same part after seeing open calls for the show in the newspaper. “By fluke, I got the part. I’ve been auditioning ever since.”

Ablack played Young Simba for a year. Afterwards, he auditioned for commercials while also playing hockey and attending high school. After four auditions and one screen test, he landed himself a role on the popular Canadian TV show Degrassi: The Next Generation.

Ablack is now recognized as Sav Bhandari, a “level-headed and mature” character as described by the Degrassi Wiki Fandom page. Bhandari comes from a traditional Muslim background, and would disobey the rules of his parents  — even dating girls outside of his religion.

Ablack said that being cast on Degrassi may have been the best thing to ever happen to him, but that it can be embarrassing to learn how to act on a show that’s internationally available. All of his mistakes were there for the world to see. Bad haircuts and first kisses were just some of the things he can relive when watching old episodes of the show.

“I had a terrible mullet and I thought that was cool. It wasn’t. I thought it looked good,” said Ablack.

Some of his co-stars included Nina Dobrev (his first kiss), and Toronto rapper Drake — or as Ablack knows him, Aubrey Graham.

“Aubrey is a really wonderful man — I’d like to be like him,” said Ablack. “I used to play his music at home on Myspace and then come back to set the next day and bump his songs in the green room. He’d be like, ‘It’s OK man, just turn that off. I don’t want anyone to know.’ He was very humble.”

Ablack said that Degrassi was the place he realized that acting may be something he wanted to do for the rest of his life.

“I really fell in love with the craft of acting. I started to go to acting classes and really tried to jump in with both feet. I think that made me really commit to this as a career,” said Ablack. 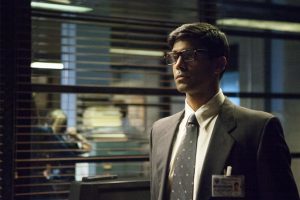 After Degrassi, he went on to appear in shows such as Orphan Black and Shadowhunters: The Mortal Instruments. Most recently, Ablack was cast in the third season of Narcos as drug enforcement agent Stoddard.

When Ablack got the email saying he had landed an audition for Narcos, he was in disbelief. “There’s no freaking way that they’re going to hire me,” Ablack had thought. “They can have any number of great actors in the  States or in Canada. Why would they go with me?”

But they wanted him. So Ablack took a year off school to film the show in Bogota, Colombia.

“I don’t think I could do both school and a career if I went anywhere else,” he said.

Ablack said playing a drug enforcement agent has broadened his repertoire as an actor.

“It’s very easy to default into kind of those quirky little things or habits that I did being on a teenage show. You can just play shy boy: that’s my bread and butter, I can do shy kid all the time,” said Ablack. “But playing a drug enforcement agent, you have to be a little more bold. It forced me a little bit to grow up as an actor, to try and stretch that range.”

Raymond’s upcoming project is a couple of episodes on the comedy Good Witch. He also stars in the webseries Teenagers, for which he won a 2016 Indie Series Award for Best Supporting Actor in a Drama.

Ablack said that despite his success, being an actor of colour has its difficulties. He said that lead roles are mostly given to men who are white and blond. “Now, they’re looking at all ethnicities, but even then you know you’re only going in so that these production companies aren’t sued later on when they show that they auditioned one brand of person,” says Ablack.

OPINION: Toronto transit submission or how I learned to stop worrying and love the TTC