Lights controlled by a smartphone, electric cars that charge overnight and a rooftop garden that supplies food to the grocery store below — these are all features of a new energy-efficient and environmentally responsible community that Ryerson students are helping to build in London, Ont.

The multipurpose, 70-hectare neighbourhood (over eight times the size of Ryerson’s campus) has been designed to have minimal ecological impact, and will be completed within 15 to 20 years. 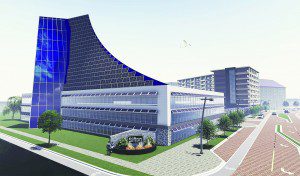 For four months in 2014, almost 90 people from 10 partner groups worked together to prepare the project proposal. This includes students from 11 universities.

The largest group of students involved came from Ryerson, with 12 researchers who contributed to the report.

Alan Fung, a mechanical and industrial engineering professor at Ryerson, connected his students with the opportunity and led the research team.

The post-graduate students working with Fung researched sustainable energy options in four-month internships. Some were directly involved in the design of certain buildings, while others were more involved in the assessment and evaluation of technologies to be used in the community. 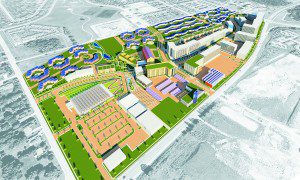 A digital rendering of the SMART Community being built in London, Ont. (Courtesy s2e Technology Inc.)

One focus for the students was developing advanced building-integrated energy systems, which is technology used in housing components, like walls and rooftops, that generates and supplies energy to the home.

Construction is underway on the SMART Community, which initially set out to just be a net-zero energy community. This means all energy needed for it to function was generated within the neighbourhood.

Once the plans were brought to Sifton, the project developers, it decided to expand and make the entire community more sustainable.

This meant introducing ideas such as electric cars, recycling rainwater and designing public spaces optimized for walking and greenery.

In 2013, Milfred Hammerbacher, CEO of s2e Technologies Inc., the clean energy consulting business behind the project, came to Ryerson to introduce the project and to recruit interested engineering students through Mitacs, an organization that connects students with research and training opportunities.

It was the first time s2e had partnered with Mitacs and Ryerson, but Hammerbacher said of the experience, “(It was) probably the coolest part of my career, to work with such motivated people … Everyone worked to make it happen.”

He plans to recruit more students for future projects, and Fung said that many of his students may find employment after their Mitacs placements.

The project consisted of many private and public partnerships, including s2e technologies, the developer group Sifton, the City of London, London Hydro and Mitacs, the organization in which Ryerson students gained access to the project. 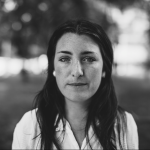