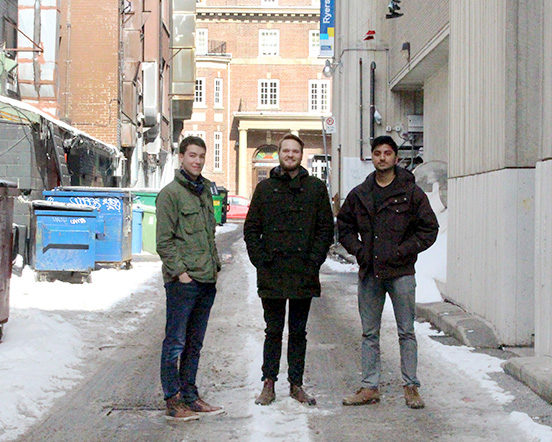 Adam Harrison, Arash Oturkar and Michael Uttley step onto the curb of O’Keefe Lane as a delivery truck squeezes between them and a row of filled dumpsters. The driver shakes his head as if he’s annoyed to see people travelling through the narrow laneway by foot.

“A lot of people right now think (that O’Keefe Lane) is just a service lane and they’re not wrong to assume so just by looking at it,” said Oturkar, a fourth-year Ryerson student.

While the trucks, garbage and graffiti dissuade most Ryerson students from walking down O’Keefe Lane, Harrison, Oturkar, Uttley and their classmate Paolo Brindley-Pantalone have spent much of the winter making trip after trip to this campus pathway.

The four fourth-year urban planning students teamed up as “Multiplied Ground,” to win the “Reimagining O’Keefe Lane” design competition. Theirs was one of nine submissions.

Ryerson, Covenant House and the Downtown Yonge Business Improvement Area (BIA) opened the competition as part of the O’Keefe Lane Revitalization project, which aimed to transform the lane into a more inviting space.

“The best way to describe it is underutilized,” Uttley said. “It’s a dense part of the city. Lots of people work here, go to school here and live here. It’s a place that could use a lot of work, but also that has a lot of potential.”

O’Keefe Lane runs north-south from Gerrard Street to Shuter Street. It’s a strip of the 1.6 kilometres of laneway that resides in the Downtown Yonge neighbourhood.

“The biggest problem with commercial lanes is garbage, sheer garbage,” said Mark Garner, executive director of the Downtown Yonge BIA. “The laneways need to be a part of the public realm and treated the same as sidewalks and roadways. They need to be clean, they need to be maintained, they need to be programmable and usable as active pedestrian nodes.”

The Downtown Yonge BIA has made cleanup efforts in O’Keefe Lane in the past, but none have yielded a permanent fix. It also improved the lighting in the lane to make it a safer route for people walking the area at night. However, most still opt to take the surrounding paths such as Yonge Street, which, although significantly busier, provides a better pedestrian experience.

“It’s an eyesore…Everyone’s been saying that for years,” Oturkar said. “Once it does get redeveloped, it will be an extremely positive contributing factor to not just the campus, but to the fabric of this Downtown Yonge neighbourhood.”

The winning team proposed increased lighting, green space, murals and features that pay homage to Eugene O’Keefe, the businessman after whom the lane is named.

To tackle the garbage dilemma, Multiplied Ground proposed a communal waste area to cluster the commercial dumpsters in one space, tucked away from sight at the entrances of the lane.

“Out of all the submissions, I think this was the one that showed practical steps to an end state for the laneway, as well as future development opportunities,” said Garner, who was one of the competition’s judges.

The design’s boldest feature was a floating courtyard that would wrap around the south end of the Student Learning Centre at Gould Street and O’Keefe Lane.

Oturkar said maintaining the ruggedness of O’Keefe Lane was equally as important as implementing an aesthetic changes in their design. “The last thing we wanted to do was tear it all apart and have a clean slate.”

“It’s got a good character. We called it the ‘grit’ of the laneway,” Uttley said. “You don’t want to take that out…the exposed brick, the duct work and the murals. It really makes for a unique urban space.”

The group visited O’Keefe Lane repeatedly over the course of their project, both individually and as a team. They studied the lane weeks in order to build a diverse and accessible plan.

“I don’t think I’ve ever been on a team where all members were so dedicated to making the best design possible,” Uttley said.

On top of visits, the team worked through urban-planning literature, learned programs like SketchUp, Photoshop and InDesign, and studied laneway models from around the world.

They were inspired by examples from around the world to understand the laneway’s potential but in the end the character right outside the door showed the way, said Uttley.

“We didn’t have to look any farther than Ryerson campus,” he said. “There are a lot of examples of just how valuable a good pedestrian environment can be on a dense campus.”

Projects like the closing of Gould Street in 2012 have greatly improved the flow of foot traffic through Ryerson and the surrounding neighbourhood. Garner said that one of Sheldon Levy’s final requests to the BIA before stepping down as the university’s president was to tidy up the campus laneways.

Along with winning a $2,000 award for their design, Multiplied Ground is invited to sit in on the future development meetings for O’Keefe Lane.

“The competition was promoted by saying, ‘Leave behind a legacy.’ That’s amazing,” Oturkar said. “Sure, the incentive is that there’s a cash prize, but I think the bigger incentive here is really being able to spark a change through your design.”