A team consisting of two Ryerson students and one from Carleton University has won the opportunity to help a Toronto school take a big leap into the future.

Our Lady of Fatima Catholic School in Scarborough is looking for ways to retrofit its building in order to become a net zero-energy school. 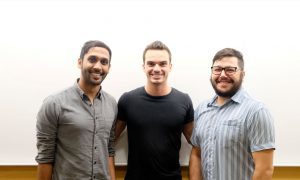 Each team was given six hours to design a pitch for the discerning eyes of a panel of judges from the green buildings industry. The presenters had five minutes to make their case.

The winners of the hackathon are afforded the opportunity to stand before the Toronto Catholic District School Board (TCDSB) and talk to them about how they can retrofit Our Lady of Fatima.

The winning team consisted of Daniel Carey and Deva Veylan from Ryerson and Yazan Zafar from Carleton.

They were perfect strangers up until the night before the competition. But together, they came up with a winning model that emphasized efficiency first.

“The general approach is, start with efficiency, and once you have reduced the demand of energy in the building then you produce things like solar and other renewables,” said Deva Veylan, a Ryerson master’s student in the building science program.

A big part of their strategy to maximize efficiency in the school’s electrical systems was to remove as much of the human element as possible from energy consumption. Much of the consumption issues plaguing buildings are the result of lights being left on due to absent-mindedness and laziness.

“We looked at building automation systems, or BAS, and that basically automates everything from light switches to dimming lights to self-tinting windows, to take as much control away from the user, so that we don’t have things like lights being left on,” said Carey, a master of architecture student at Ryerson.

Last April, Mike Mattos, president of the Mount Dennis Community Association, announced to Metro News that he would like his neighbourhood to become Toronto’s first carbon-neutral neighbourhood.

The following May, the city of Toronto’s parks and environment committee published its plan, called the Climate Action for a Healthy, Equitable and Prosperous Toronto. The plan called for 100 per cent of buildings in Toronto to become near net zero by 2030. 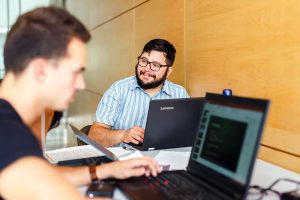 Deva Veylan (right), working on the pitch that won his team first place prior to the pitch presentations in the George Vari Engineering and Computing Centre. (Photo by Becca Gilgan)

While the need for zero-emissions buildings might seem self-evident, the team is hyper-aware of the factors that could lead to potential pushback towards their proposal from the TCDSB.

The cost of the hypothetical project casts a large and ominous shadow over their work.

“I’ve worked for an architecture firm that has designed schools for several of the school boards in Toronto. It has always been an issue because it is such a strict budget to begin with,” Carey said.

The team is pinning its hopes on the school board seeing a possible benefit to the community around the school, should it be retrofitted. Zafar, a recent graduate of Carleton’s engineering program, said one of those benefits could be connecting solar panels to direct current microgrids.

Direct current is when electricity flows in only one direction rather than back and forth along a wire. A microgrid is a small-scale localized grid that works in conjunction with the large grid of a city.

“It’s a smart system that looks at how much energy the school needs and when the battery storage system is full and will offset it to the grid,” Zafar said.